North Sea Port purchased this extraordinary piece of cultural heritage in 2011. Back then, it was still called the ‘House of the Free Ship's Captains’. For two whole years, the inside and outside underwent a thorough renovation. The Havenhuis was officially ready and renamed in autumn 2018.
scroll naar links scroll naar rechts

The Havenhuis is being used as a reception facility for welcoming national and international companies and guests on behalf of the entire North Sea Port port area. The building houses salons for this purpose, while the cellar and loft spaces will be used to receive guests.

An exhibition on the today's cross-border port, extending from Vlissingen to Ghent, is open to the public.

Starting in the 11th century, flourishing trade arose along both banks of the Leie, known as the Graslei and the Korenlei. These two quays made up the port belonging to the city of Ghent.

In 1530, the Guild of the Free Ship's Captains bought the building on the Graslei from the Millers’ Guild. The Free Ship's Captains – de Vrije Schippers – were independent contractors who enjoyed unfettered access to the inland waterways of Ghent, unlike their counterparts the Onvrije Schippers. The latter were employed by others and were obliged to load their goods onto the Free Captain's ships at the edge of the city.

During this era, the building was clad in a new stone façade made from Balegem sandstone, an example of the Brabantine Gothic style. The structure is characterised by the light-coloured Balegem sandstone, the rich and highly detailed decoration, the heraldic crests (including that of Holy Roman Charles V) and its turrets.

The Guild of the Free Ship's Captains owned the building until the second half of the 17th century, when they were forced to sell it for financial reasons. The power of the guild was waning by then as well. After that, the building changed hands a number of times. The guild house was redecorated to serve a number of purposes, yet its basic structure remained virtually unaltered.

The building was thoroughly restored in preparation for the 1913 World's Fair. The stairwell and the chambers on the ground floor were refurbished in Gothic Revival style with detailed woodcut prints and figurative murals. Unfortunately, the quality of the sandstone used at that time was far inferior to that of the original stone. As a result, by 2011, the façade was in extremely poor condition once more. That was the year that port company North Sea Port took ownership of this prominent structure. Following its restoration – which was conducted with respect for the rich past and attention to multifunctional and appropriate use – the building was ready for a new future as the Havenhuis.

For centuries, the Graslei and the Korenlei were buzzing centres of port activity at the heart of Ghent. When the port moved away from the centre and to the north of the city at the end of the nineteenth century, however, that industrious hum was silenced. And the port disappeared from view as well.

Following the summer of 2019, the port of Ghent revisited its roots. At that time, on the ground floor of the Havenhuis, North Sea Port opened an exhibition on the port as it is today: a 9,300-hectare cross-border port area stretching 60 kilometres from Vlissingen, Borssele and Terneuzen in the Netherlands to Ghent in Belgium and employing (either directly or indirectly) some 100,000 people. The exhibition provides a multimedia glimpse of the port and its activities by means of a scale model and corresponding video presentation. 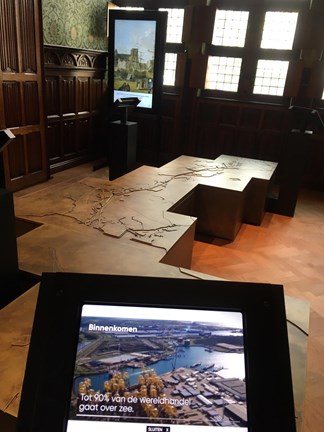