With 73.6 million tons of cargo transhipment from maritime shipping (+7%) and 64.5 million tons from inland shipping (+7%) in 2022, companies in North Sea Port experienced their best year since the merger in 2018. Dry bulk continues to increase. The US replaced Russia as the biggest trading partner.

Five years ago, Zeeland Sea Ports (Vlissingen and Terneuzen) in the Netherlands and the Flemish/Belgian Port of Ghent merged to form a single port. North Sea Port became the new brand name of the 60-kilometre-long cross-border Dutch-Flemish port. It instantly became one of Europe’s top ten ports. “Our aim was to grow in various areas to make sure we could maintain that position as a newly established port, and indeed to continue our development into a top European port. With a new record year since the merger five years ago, the companies in the port have further cemented that position. That’s pretty remarkable after Brexit, two years of the pandemic, the impact of the Ukraine-Russia war and the energy crisis”, points out North Sea Port CEO Daan Schalck.

In 2022, five years after the merger, North Sea Port posted the best year yet in its still fledgling history in terms of seaborne cargo transhipment: up 7%, a further 3% up on the previous record year of 2019. Imports increased by 6%, exports by 9%. The import-export ratio was 72%-28%.

Daan Schalck, CEO of North Sea Port: "With another record year, North Sea Port is cementing its position as the number ten port in Europe. That’s pretty remarkable after Brexit, two years of the pandemic, the impact of the Ukraine-Russia war and the energy crisis”.

Dry bulk still on the rise

North Sea Port has traditionally been a real bulk port. Dry bulk continues to show marked growth, even compared to the pre-Covid period. Liquid bulk and general cargo remain below their pre-Covid levels.

Dry bulk again accounted for more than half of seaborne cargo transhipment in 2022: 54% (39.9 million tons, +10% compared to 2021). That growth came from commodities including oilseeds, crude iron, fertilizers and coal (+32%), for which additional stocks were built up due to EU sanctions in connection with the Ukraine-Russia war. Grain transhipment declined.

Liquid bulk accounted for 24% of the total in 2022 (17.6 million tons, +5%). The increase was particularly marked in the transhipment of biodiesel, diesel, liquid fertilizers and kerosene.
The share of break bulk was 14% (10 million tons, +5%). This increase is attributable to growth in the transhipment of steel plates and bananas (shift from containerised transport).

The roll on/roll off (ro/ro) segment grew by 5% (3.7 million tons, +2%). This rise was due to increased transportation of cars. The share of trailers remained the same.

Containers made up 3% of seaborne cargo transhipment (2.6 million tons, -9%; there was also a fall measured in TEUs, to 230,000 TEUs (-31,000 TEUs)). The reason for the decline was the reduced transportation of bananas in containers (shift to transportation as break bulk).

The record year for inland waterway transhipment does not stand in isolation. No less than 58% of all transport between the port and the European hinterland in all directions is conducted via inland shipping.

The expectation was that the pandemic losses of the previous two years would be made up in 2022, and they were. The Ukraine-Russia war and the accompanying energy crisis represent a significant shock to world trade. In these uncertain times, North Sea Port has posted a new record year, its best since the merger five years ago. This is partly because of the build-up of additional stocks, partly because of growth in various types of goods, reflecting the fact that industry is maintaining its activity levels.

North Sea Port expects 2023 to be less of a bumper year, but still a solid one, with seaborne cargo transhipment experiencing similar volumes in the four quarters, well above 70 million tons. The hope is that energy prices will fall. Investment is expected to continue at a similar level. 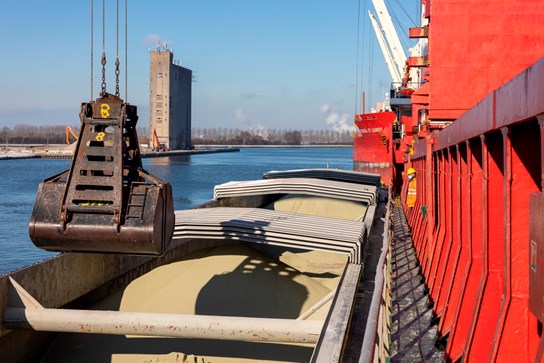