At North Sea Port, work is carried out to maintain and renew the maritime infrastructure not only on land, but also in the water – from the inland waterway lock in Evergem, to the Nieuwe Sluis in Terneuzen, to the Quarleskade in Vlissingen.

If there's anyone who knows how to make sure that infrastructure lasts, it's the North Sea Port wet infrastructure manager Dennis van den Broeke: "Every day, we are at work on maintaining our current facilities and building new infrastructure. In the process, we always make optimal use of the available space, both for the established companies and for potential new customers." Bulk Terminal Zeeland (BTZ) in Vlissingen is one such existing company that is being expanded. "That's a nice addition, not only for BTZ, but for the entire port area," says managing director Jacco Geleijnse.

One of the largest worksites is the Nieuwe Sluis (the 'New Lock') in Terneuzen. Environmental manager Harm Verbeek explains: "With the Nieuwe Sluis, we not only want to reduce waiting times, but also increase security. If there's a malfunction somewhere, a second sea lock is available. The Nieuwe Sluis is also being made bigger, so that larger and deeper vessels will be able to reach the ports of Ghent and Terneuzen."

Hydrographer Jolie De Geyter keeps an eye on making sure the waterways are also deep enough to allow those large ships through: "While non-tidal ports are sounded twice a year, the tidal port of Vlissingen is sounded six times a year. If we see in the results that the port is silting up too much, it will have to be dredged." And this is how we provide a safe and renewed port every day! 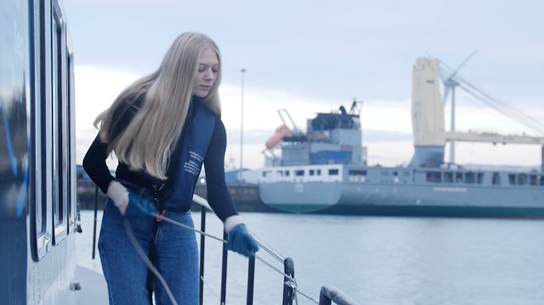