Watch Onze Haven (Our Port): Martijn escorts ships safely in and out of North Sea Port

A pilot isn't just someone who flies planes. As Martijn Lockefeer demonstrates, it's an important job within North Sea Port. As a canal and sea pilot, he accompanies ships on their journey along the Ghent-Terneuzen canal, via the Western Scheldt, to the North Sea.

With safety as top priority, shipping traffic in our port is closely monitored from harbor masters' offices in Flanders and Zeeland. But also on the water, pilots ensure that sea-going vessels are safely guided in and out of the port. The Western Scheldt, with its twists and turns and sandbanks, is one of the most difficult to navigate waterways in the world.

"First and foremost, a pilot advises the captain on navigation," Martijn begins. The area between the ports of Ghent, Vlissingen and Antwerp is heavily trafficked. For example, when we have to pass another large ship, as a pilot I have to find the locations where that's possible. Not only the places, but also the times when ships pass each other is important. The lock planning ensures that ships arrive at the lock at the right moment for that to be possible."

Martijn's journey on the Humbria Seaways ends at Steenbank on the North Sea, the point at which ships are escorted to and from the port. While Martijn hurries back to the port, he adds, with a smile: "It gives me great satisfaction to be a small part of all that happens in the port." 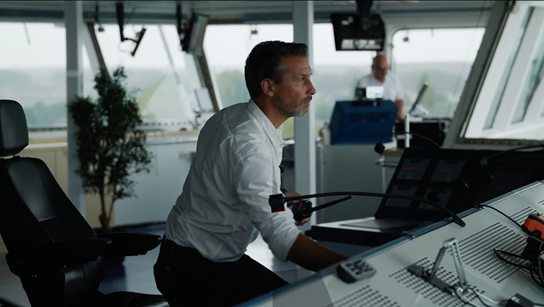