Watch Onze Haven (Our Port): From multimodal to modal shift

Improving the accessibility of the port area is what North Sea Port will be working on in the coming years. Not only on the water, but also on the road. From Ghent to Vlissingen, hard work is already being done on roads, bicycle paths and railroad tracks.

"Improving bicycle safety in our port is one of the bigger goals," says project manager at North Sea Port Marien Kroes. "When new projects are done, separate bicycle paths are always included in the plans, but we also create new bicycle paths for existing projects to address unsafe situations. That's not only safer for local residents, but also more sustainable for employees from the port."

"We are currently building three bicycle bridges over the R4 ring road around the Ghent part of the port, the first of which has already been completed," continues Marijn Struyf, a spokesperson for De Werkvennootschap, which promotes major mobility projects for the Flemish Government. "Until now, the R4 has been very difficult for cyclists and pedestrians to cross, but soon they will be able to cycle or walk for more than twelve kilometers (over 7 miles) without encountering a single car."

"The first 'turbo junction' in Flanders is also located on the R4," Struyf adds. "The turbo roundabout is just one of the many improvements we will be making in the coming years to drastically improve the flow of freight traffic, among other things."

Nevertheless, North Sea Port wants to get as many goods as possible out of the truck and onto the train – the so-called modal shift. "That's why North Sea Port has taken the initiative to start up the Rail Ghent-Terneuzen project," says Hans de Meij, project manager at North Sea Port. "In doing so, we will link existing rail connections at three essential points." 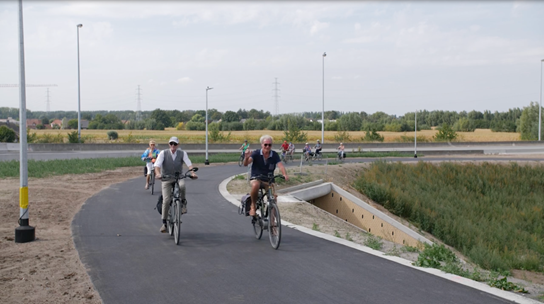