In 2025, Volvo Trucks will start building battery modules for battery packs for its electric trucks in Ghent. This represents an investment of €75 million. After the summer of 2023, the production of electric trucks will also start at the Ghent facility.

To date, both the cells and modules for the truck batteries have been supplied to Volvo Trucks by external suppliers. Volvo Trucks is currently looking into building the cells at a Volvo plant in Sweden, close to its existing engine plant in Skôvde. Assembling the modules with the ‘Swedish’ cells will then become the new activity in Ghent. In this way, the Volvo Group wants to bring the know-how in-house. The company already designs and builds its own truck engines. In the future, it wants to do the same with batteries.

"By 2025, the first module line should be operational to supply batteries for the electric trucks being built in Ghent. This will require an initial investment of €75 million”, explains Koen Leemans, Vice-President of the Ghent Volvo Trucks plant.

Volvo Trucks wants at least 50% of the trucks it sells worldwide to be electric trucks by 2030. Additional module lines will be needed at the Ghent module plant to meet that customer demand. "We are now launching a study to construct a new building covering about 12,000 m2 at our site in Ghent. The new high-tech module plant will consist of an almost fully automated process. That means we will be recruiting new employees with the necessary skills. However, we also want to continue to build our internal skills as we already do through our staff development programmes and our internal training centre”, he adds.

The Swedish Volvo truck plant in Gothenborg is already building heavy electric trucks on the same line as conventional trucks, the first in the world to do so. The battery packs needed to power those electric trucks will be built at Volvo's Ghent plant. This represents a first within the Volvo Group. The initial capacity of the battery pack plant today is 30,000 battery packs per year.

After the summer of 2023, the production of electric trucks will also begin at the Ghent truck plant. “We are currently building diesel and LNG trucks on our production lines. They will soon be joined by electric trucks”, says Leemans.

North Sea Port has defined automotive as one of seven spearhead sectors in its strategic plan. On the industrial side, the assembly plants of Volvo Trucks and Volvo Cars in Ghent are the main drivers in this segment. Not only do they generate significant flows of parts and finished products and therefore a great deal of logistics activity, but they also provide more than 10,000 direct jobs and considerable added value. Added to this is indirect employment with suppliers and logistics service providers.

The cross-border port is also an important hub in Europe for other vehicle marques, with ro/ro lines connecting Ghent to Scandinavia and Vlissingen to the United Kingdom, a rail link to China, and important distribution operations for players like Honda. 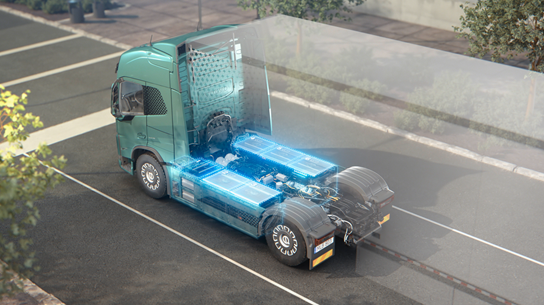