Volvo Cars officially unveiled an all-new battery factory at its Belgian manufacturing site in Ghent on Thursday 5th of March. The first fully electric vehicle, the XC40 Recharge P8, is to be built there later this year.

The XC40 Recharge P8 is the first in a range of fully electric Volvo vehicles. And the first Volvo with a brand-new infotainment system supported by Google's Android operating system.

Volvo will launch an all-electric car every year for the next five years, as the brand is aiming to achieve half of its global sales by 2025 with fully electric vehicles and the other half with hybrid models. Recharge is the collective name that will be given to all rechargeable Volvo cars which have either fully electric or plug-in hybrid powertrains.

The inauguration of the battery factory is the latest example of Volvo Cars' ambitious electrification strategy and climate action plan. Between 2018 and 2025, the company aims to reduce its carbon footprint of the life cycle per vehicle by 40%. In doing so, the company is seeking to take the first step towards its goal of becoming a climate-neutral company by 2040.

Ghent in a trailblazing role

With 6,500 employees, Volvo is one of the largest employers at North Sea Port and in Ghent. The Ghent branch will be the first of the factories within the worldwide Volvo group to have a battery assembly zone. A great way for one of the primary players at the cross-border harbour to further anchor itself.

Over the next few years, battery assembly will become an important part of Volvo Cars' worldwide assembly operations as it continues to electrify its entire range. The factory in Ghent will be able to supply the other manufacturing sites with important expertise in the field of process optimisation and efficiency. Earlier this year, Volvo Cars announced the construction of a new battery assembly line at its American factory in Charleston (South Carolina). Construction of this is expected to start later this year. Volvo Cars will also build fully electric cars at a Volvo-operated manufacturing site in Luqiao, China.

Ghent is one of the two Volvo Cars automobile factories in Europe (the other is located in Gothenburg) and has been producing Volvo cars ever since 1965. 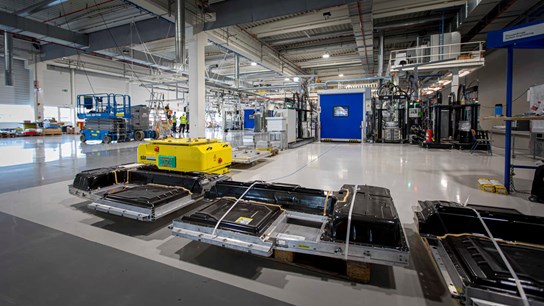