From now on, cars from Volvo Cars in Ghent will get to their final destinations faster and more sustainably. At a new train terminal near Mercatordok in North Sea Port, cars are loaded onto and off ships and onto and off trains.

This collaboration between the Volvo Cars plant, the Danish shipping company DFDS and the Belgian rail freight operator Lineas efficiently brings together the different modes of transport (ship, train, truck). Thanks to the extensive use of rail transport, the throughput time from factory to final destination is now up to 30% faster.

Volvo Cars has converted the new V6 terminal (52,469m2) near Mercatordok into a brand new and fully-fledged train terminal. The concession was previously used as a storage area for DFDS rail trailers. It has now become a true logistics hub for efficient, sustainable and multimodal automotive transport. In addition to a substantial investment from Volvo Cars, this unique project has also received backing from shipping company DFDS and rail freight operator Lineas, with the overarching support of North Sea Port, which owns the area.

The proximity of the new terminal to the water at Mercatordok is a major asset. This terminal is part of Volvo Cars' strategy to operate more quickly, more sustainably and more cost-efficiently in terms of logistics as well as production. By exporting some of the cars by train instead of by ship or truck, the impact on the environment is reduced and the cars reach their final destination faster. As a result, the throughput time from factory to final destination has been cut by up to 30%. The fact that the different modes of transport (truck, ship and train) are now also centralised at a single location makes this an example of efficient multimodal automotive transport.

Thanks to this modal shift, Volvo is taking about 5,000 trucks off our roads every year, which is the equivalent of 150 per week.

Trains carrying cars for the Chinese market are among those departing from the new terminal at Mercatordok, headed for Xi'an and Chengdu. Trains bound for Italy (Sacconago) and Austria(Schwertberg) are also loaded at the new rail terminal.

On Monday 23 November, Multimodal Flanders, the consultancy body for multimodal transport, recognised the unique collaboration between Volvo Cars, DFDS and Lineas with a 'Pioneers Award'. This was a reward for the pioneering role they are playing in their approach to efficient and sustainable transport. 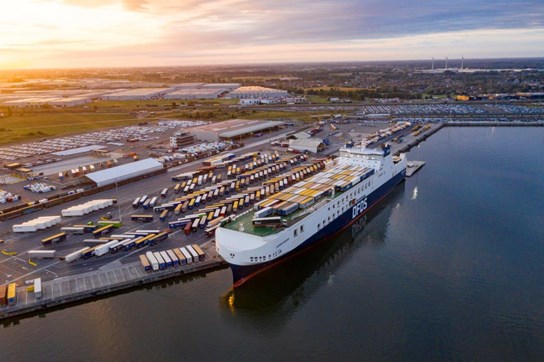