Volvo Car has started production of a second all-electric model at its factory in Ghent. As such, the carmaker is further consolidating its presence in North Sea Port, which is good news in terms of employment and added value.

With the new C40 Recharge model, Volvo Car is underscoring its aim of eventually selling only electric cars. The assembly plant at Sifferdok in Ghent is playing a pioneering role in this respect. Last year, Volvo Car Gent started production of another electric model, the XC40 Recharge.

From next year, more than half of the production capacity in Ghent will be suitable for the construction of fully electric and therefore emission-free cars. By 2025, they will account for half of Volvo Car's global sales.

The automotive sector is an important pillar for North Sea Port. With 6,500 employees, Volvo Car Gent is the biggest industrial employer in East Flanders. The plant generates significant flows of components and finished products. It also provides many indirect jobs with suppliers and logistics service providers.

The Ghent plant is one of Volvo’s largest. Last year, it turned out almost 195,000 cars, a third of all Volvo cars sold worldwide.

Volvo Car Gent is part of the important automotive sector in North Sea Port, which is divided between Ghent and Vlissingen. Ghent is also home to the biggest Volvo Truck assembly plant. Honda is also part of the picture, having developed its main European logistics hub in the port. Moreover, many cars of other makes pass through Ghent and Vlissingen, making North Sea Port a true car port.

Volvo Cars was founded in 1927. Today, the company is one of the best-known and most respected car marques in the world. In 2020, 661,713 Volvo cars were sold in around 100 countries. Since 2010, Volvo Cars has been owned by China's Zhejiang Geely Holding. 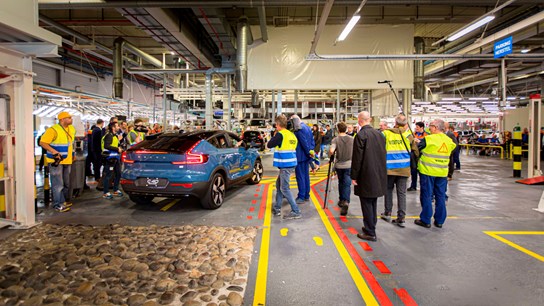