Volvo Car is to triple its production capacity for electric cars in the Ghent plant in the coming years. The North Sea Port facility is also preparing production of a second fully electric model this year.

The capacity increase for electric cars follows the strong demand for Volvo Cars electric Recharge models. In terms of sales, the share of these cars more than doubled in 2020 compared to 2019. "Electrification is the future for Volvo Cars. I am proud that our production plant is leading the way in electrification. We are preparing a significant increase of our capacity and we will be the first to produce the second all-electric Volvo model", says Stefan Fesser, managing director of Volvo Car Gent.

2020 was a special year for the Ghent production plant. A total of 194,890 cars were produced (production 2019: 206,225), lower than previous years. This is due to the forced shutdown of production in the spring as a result of the corona crisis. Thanks to the sustained efforts to create a corona-safe production process, it was possible to finish the year 2020 with ouput figures in line with the adjusted targets, according to Volvo Car.

This year the plant is preparing the planned expansion of the electrification capacity. Major technical and infrastructural changes are taking place to achieve this expansion. Meanwhile, every effort is being made to launch the new model. The car is based on CMA (Compact Modular Architecture), the platform for Volvo's compact models. Volvo Car Gent’s sustainability objectives are progressing steadily. This year, special attention will be paid to new developments to save water and other forms of energy in the production process, according to Volvo Car Gent.

94% of the cars produced in Ghent are exported. Europe was the largest market last year (73%). In addition, 17% of the cars went to the American countries and 5% to Asia.

Volvo Car Gent is a car factory in Ghent in North Sea Port, owned by Volvo Car Corporation. It consists of a welding plant, spraying plant, battery production and final assembly. With 6,500 employees, it is the largest industrial employer in the province of East Flanders. Production includes V60 and X40 models and the all-electric XC40 Recharge. 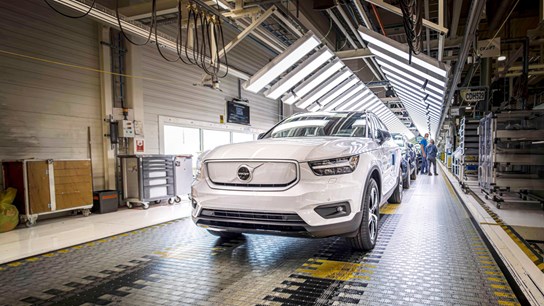