VoltH2 Terneuzen and Virya Energy are preparing the construction of a green hydrogen plant in North Sea Port. They recently signed a cooperation agreement to that end in Terneuzen.

VoltH2 has signed a cooperation agreement in preparation of a long-term concession contract with North Sea Port for a 30,000 m2 industrial plot in the port area in Terneuzen. The company has begun planning and developing the construction of a green hydrogen plant with distribution capabilities.

VoltH2 had previously signed a cooperation agreement with North Sea Port to build a hydrogen plant in Vlissingen in August 2020.

VoltH2 Terneuzen plans to construct a 25 MW electrolysis unit. The plant will produce up to 3,600 tons of green hydrogen annually. In doing so, the plant will contribute to the sustainability of the entire North Sea Port area. Moreover, the design of the green hydrogen plant is scalable, meaning that production can be doubled and possibly tripled at a later date.

The site is accessible by road, rail and waterway for the supply and distribution of green hydrogen to the wider area. The investment budget for the initial phase is 35 to 40 million euros.

The location is in the Axelse Vlakte industrial park in Terneuzen, part of North Sea Port. Besides the fact that the plant is located in a zone where a lot of hydrogen is used, there are also opportunities for selling the heat. The site is also close to an existing Bio LNG producer and there are two bio-steam and bio-ethanol projects under development in the immediate vicinity. As such, the area is positioned to become one of the Netherlands’ leading clusters of sustainable fuels and raw materials producers, facilitating potential synergies between these various new forms of production and the use of green hydrogen. Green hydrogen is suitable for use as fuel and feedstock in production processes, alongside grey and blue hydrogen.

Daan Schalck, CEO North Sea Port: "North Sea Port is strongly committed to the energy transition. VoltH2’s new hydrogen plant in Terneuzen contributes to this effort and offers many opportunities for companies located in the Axelse Vlakte industrial park. In doing so, it further enhances North Sea Port’s position as a hydrogen hub in Western Europe." 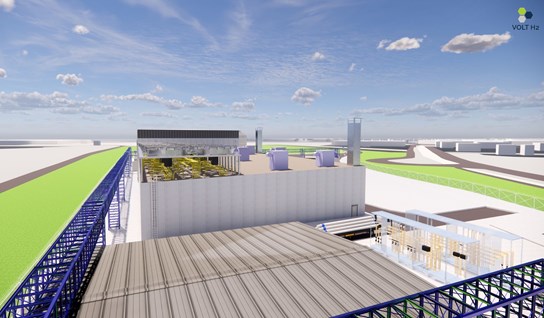