On Thursday 27 October, Veolia opened a new sorting line in the Ghent section of North Sea Port. This line will ensure that up to 35% of the incoming bulk industrial waste is recycled into new raw materials. As a result, some 21,000 tons of waste will be put to new use each year.

This also makes waste management company Veolia the first waste processing company to take initiative to meet the new environmental regulations laid down by the Flemish government, which will enter into full force at the start of 2023. With this innovation, Veolia underscores the societal interest of sorting waste flows: recycling generates fewer tons of greenhouse gases than harvesting or extracting primary raw materials.

Minister-President of Flanders Jan Jambon: “This investment by Veolia is in keeping with the Flemish government's plans to become a leader in the emerging circular economy.”

Minister-President of Flanders Jan Jambon praised Veolia's pioneering efforts and joined the Mayor of Ghent, Mathias De Clercq, in officially opening the new sorting line in the sorting and transshipment centre for non-hazardous waste in Ghent.

Minister-President of Flanders Jan Jambon had the following to say about the new sorting line: “This investment by Veolia is in keeping with the Flemish government's plans to become a leader in the emerging circular economy. Not only are we hereby reducing our environmental impact and our dependence on raw materials from other countries, we are also encouraging the development of new technological solutions to facilitate high-quality recycling. By doing so, we are establishing Flanders as a vital hub of the circular economy.”

Mayor of Ghent Mathias De Clercq added: “Ghent is developing into the leading hub for the circular economy. Through smart waste management and reuse of waste flows, we are able to drastically reduce our CO2 emissions. By doing so, we join our business owners in working toward a climate-neutral city and port.”

The sorting line incorporates the latest in sorting technology, combined with a unique functional design. Various components – such as sieves, magnets, visual-recognition cameras and mechanical and optical separators – work together for optimum sorting, making it possible to recover 35% of the waste as recyclable materials. The rubbish in question is dry waste from Flemish businesses, from which Veolia extracts reusable materials such as paper and cardboard, hard plastics, plastic film, wood and metals, but also less obvious waste flows such as mattresses and styrofoam. Until recently, that waste was transported in bulk to waste-to-energy plants, where it was converted into electricity and steam. But as of today, the new sorting line makes it possible to recover the aforementioned materials as well. Most of the recovered materials are then sent to local processing plants in Belgium, which recycle them into new raw materials. In other words, Veolia seeks outs the most local and circular-economy-friendly solution possible for each waste flow.

“Local recycling benefits our local circular economy and our emissions, meaning it also contributes to Flanders’ ability to achieve its climate goals. The societal importance of innovations in our sector, like this one, is impossible to overstate,” says Nicolas Germond, CEO of Veolia Belgium & Luxembourg.

For example: the process of recycling one ton of aluminium results in 11 fewer tons of CO2 emissions than the traditional extraction of the same quantity of aluminium. Thanks to this new investment, Veolia will be able to process up to 60,000 tons of waste per year at its Ghent facility, which works out to an average of 20 tons per hour.

Veolia began building the sorting line in 2020 and it was taken into use in the spring of 2022. This required a total investment of 12 million euros and has created over 20 new jobs.

According to Daan Schalck, CEO of North Sea Port, the new sorting line is perfectly aligned to the strategy of the port: “We are therefore extremely pleased to have attracted this kind of circular project with such a positive social impact. Projects like this one contribute to making North Sea Port a top European port. After all, the circular economy is one of our key focus areas in further developing our port and investing in the creation of additional jobs. 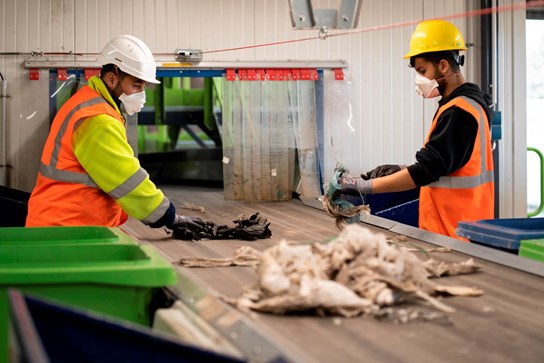