The Bertschi Group has virtually doubled the size of its terminal in Terneuzen. The expansion was needed to cope with increased demand for rail transport for chemical products to and from North Sea Port.

Bertschi is a first-tier player in Europe in the transport of chemical products, by road, water and rail. Train is the most important mode of transportation for Bertschi, with a 75% share (compared to 15% for barge and 10% for truck).

The Swiss group has operated a rail terminal in Terneuzen since 2008. It is located in ValuePark, the 65-hectare platform for logistics, warehousing and other services at Braakman dock.

The total area of that terminal has been increased from 12,000 to 22,000 square metres, providing additional room for container storage. This is welcome, as customer demand for interim storage and transportation of containers is rising fast.

The tracks have also been extended by 225 metres so that longer trains can be loaded at the terminal. In addition, a new turnout allows the locomotive to easily move back to the head of the train, so that the whole train does not have to turn around before departure, saving time.

As a result, companies can shift more cargo to rail. That translates to 70% reduced CO2 emissions compared to road transport. And Bertschi is going the extra mile: all vehicles and handling equipment at its terminal will henceforth run on biofuel. The result will be to cut emissions by 90% and keep hundreds of tons of CO2 out of the air on an annual basis.

Five times a week, a train arrives at Bertschi to pick up tank containers for distribution throughout Europe.

As a multimodal port, North Sea Port also wants to further develop rail transport. The expansion of Bertschi’s site is in line with that aim. 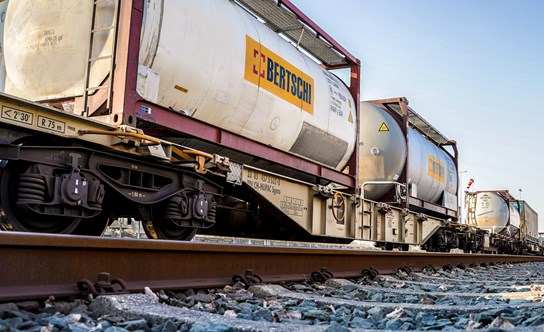