Logistics service provider Slavenburg & Huyser is moving into a 50,000 m² European distribution centre for the distribution of solar panels at Verbrugge International in Vlissingen. For North Sea Port, this adds another string to its bow as an energy port and inland navigation hub.

The rise in energy prices has boosted demand for solar panels. The Dutch service provider Slavenburg & Huyser, which is active in the distribution of these panels, was therefore looking for appropriate logistics solutions and additional storage capacity for the larger volumes it now has to handle.

Slavenburg found the right mix at Verbrugge International in North Sea Port in Vlissingen, says director Leo Poot: "A central location between Antwerp and Rotterdam, good inland waterway links to the major container terminals at those ports, the capacity to move large cargo volumes and warehouse space directly adjacent to an inland container hub. That combination guarantees fast container handling. The solar panels can be on the road to their destination just days after their arrival."

All of which means Verbrugge is instantly reaping the benefits from its recent investments in container handling, points out commercial manager Dolf van Dijk. "We have just completed construction of a seven-hectare container yard at the Verbrugge Zeeland Terminal at Quarleshaven. It is running a brand new Terminal Operating System that takes our container business to the next level."

Verbrugge’s investment was prompted by congestion at neighbouring container ports and the increased demand for capacity. The group has years of experience in containers. "Every year we load and unload around 100,000 containers and transport them by water. With every container we handle, we make Europe a little more sustainable”, adds Dolf van Dijk.

The new contract highlights two major strengths of North Sea Port. The port is particularly prominent in European inland navigation, with 60 million tons in cargo transhipment and tens of thousands of vessels loading and unloading there every year.

North Sea Port is equally well placed as an energy port. It not only plays an important role in the generation of electricity and the transition to green power but also in the distribution of energy, logistics activities around the construction of wind farms and now also the distribution of solar panels.

"They are elements that continuously reinforce one another. The new contract with Verbrugge International will help to further embed those activities”, observes North Sea Port CEO Daan Schalck. 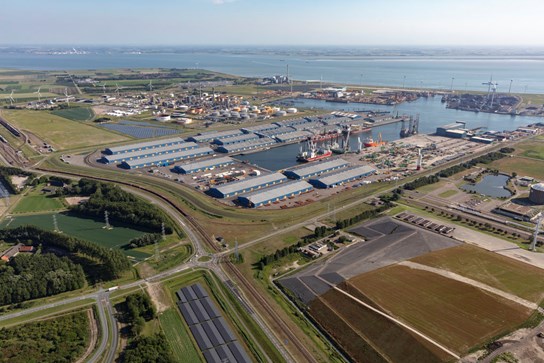