There would be no port without water. The better the condition of that water, the better the port fares. The 'Internet of Water' project is now also monitoring the water quality in the Ghent-Terneuzen canal. This is very important for North Sea Port for several reasons.

As a traffic artery for seagoing and inland vessels and as a source of cooling and process water for industry, the Ghent-Terneuzen Sea Canal performs a distinct economic function. But the role of the waterway does not end there. Nature development and biodiversity, a high-quality living environment, sustainable water supplies and sustainable management for the wider region are all elements that are becoming increasingly important for the current and future management of the canal.

The quality and quantity of water are crucial factors in all of this. As a sustainable port, North Sea Port is committed to a robust and integrated water system, based on optimum water management.

North Sea Port is actively involved in the 'Internet of Water’ project initiated by imec, VITO, Vlakwa, Vlaamse Milieu Maatschappij, De Watergroep and Aquafin with the support of the Flemish Agency for Innovation and Entrepreneurship (VLAIO).

Within this four-year research project, which was launched in 2019, Flanders is rolling out a dense network of smart sensors. The goal is to be continuously monitoring parameters such as acidity (pH), salt concentration and temperature by 2023. Innovative algorithms and hydrological models will process all the data in order to anticipate water quality.

After the development and testing of sensors and measuring systems, the network will be rolled out widely and the intelligent software fine-tuned from 2022 onwards.

North Sea Port is already part of the network. Smart sensors have been placed at four locations on the Ghent-Terneuzen canal, two on the Ghent side and two on the Dutch side, specifically at Grootdok and Rodenhuizedok in Ghent and Autrichehaven and Zevenaarhaven in Terneuzen.

As the infrastructure manager, North Sea Port also benefits from good monitoring. Salinisation, for example, is not only bad for agriculture and nature, the salt also negatively affects steel and wooden structures such as quays and foundation piles. The Internet of Water project supports future-proof asset management. 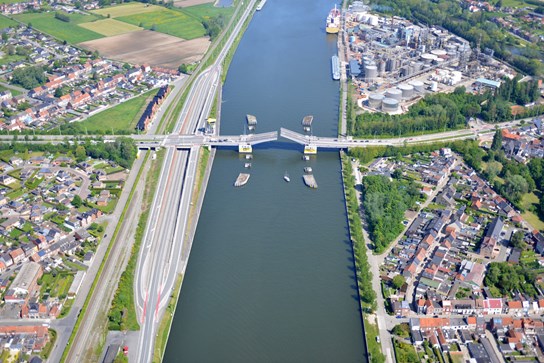