North Sea Port: what has five years of merger brought us?

North Sea Port has existed as a cross-border Dutch-Flemish merger port for five years. The ambition was to make progress and achieve results across the border in the port area, in order to further develop into a European port of excellence.

It was at the Flemish-Dutch Summit in Ghent on 7 November 2016 that the merger between Zeeland Seaports (Vlissingen and Terneuzen) and the port of Ghent was formally put on the agenda for the first time. One year, one month and one day later, on 8 December 2017, the new name was announced: North Sea Port, a name with some bravado, and with the baseline “Together Smarter”.

What has the regionally, (inter)nationally well-received merger produced in the meantime?

Five years later, the transhipment of goods by sea is experiencing its best year ever. With 73.6 million tonnes, 2022 was a record year for the third time. This is approximately 10% more than at the start. A start was made with 1,000 hectares of available land for investors. Now, 241ha of land has been issued in the port area; on average, it's three times more than expected per year. Employment has also risen: from 95,000 (in)direct jobs to 102,000, where only 100,000 were expected. This resulted in an added value of EUR 12.6 billion, while the forecast was EUR 12 billion.

More jobs and investments were realised in a world that looked different after the merger.

In a world transformed by Brexit, corona, war and energy prices, North Sea Port is holding up

Brexit presented an entire series of uncertainties, but it also provided opportunities. After all, the UK was and still is one of the main trading partners. The UK now holds third place. The corona pandemic was responsible for a blow for the transhipment of goods: a loss of 13% in 2020. Two years later this loss was recovered.

Then, the Russia/Ukraine war cut into trade relations in 2022. Russia is the second most important trading partner and trade suffered a loss of 15%. Russia has been overtaken by the USA. Trade with Ukraine has been halved. The war led to an energy crisis with an impact on activity and prices, resulting in inflation in the Netherlands and Belgium.

In these turbulent times, North Sea Port not only survived, but even made progress. The fifth year since the merger was the best year on record. Companies tried to play it safe in 2022 and looked for new supplies in other regions such as the US, Canada and Australia. But it was also a record year because the supply of raw materials continued to increase - the industry kept going.

The compass of the shareholders: climate, jobs and energy

Against the background of assumptions, forecasts and a changing world, shareholders provided the port with a compass. In the development, the port authority has three tasks: focus on economic development and employment, sustainability and climate and a financially sound basis.

Daan Schalck, CEO North Sea Port: “The development of the port is no longer just about tonnage. From now on, climate, jobs and energy will be guiding.”

The Strategic Plan “Connect 2025” saw the light of day in the autumn of 2021. In order to develop the port as a top European port, the coming years will see investments in circular economy, climate, energy, logistics chain, infrastructure and digitisation. The relationship with companies, governments and environment will receive special attention, with the port authority acting as a connector.

At the start, the merger had the ambition to achieve results across the border. After five years, companies, the port authority and the political world can boast many results. Without the merger, these might not (yet) have been achieved or would have been achieved more slowly.

Ready for the future

North Sea Port's baseline is “Together Smarter”. After five years, people in politics, companies, infrastructure operators, organisations and the population are on the same page.

At the start, North Sea Port joined the top of European ports. After five years, it has become a player of national and European importance. North Sea Port is ready to continue to tackle the challenges for the coming years. 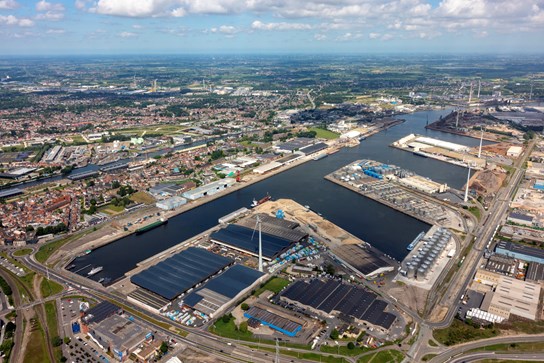