Regular North Sea Port vessels may now schedule their lockages in the Terneuzen lock some months in advance. This is the result of successful trials with four regular liner services in collaboration with the Dutch Rijkswaterstaat and the Flemish and Dutch pilotage services.

Sea-going vessels sailing in the port area of North Sea Port will pass the Terneuzen locks on their way to Terneuzen or Ghent from the Westerschelde. In the trial period from 18 September to 31 December 2019, four liner services (DFDS, I-Motion Shipping, Outokumpu and Wagenborg) were given their scheduled lockage times up to four months in advance. Which is far sooner than the current procedure of some hours prior to the lockage.

These vessels have prepared their sailing schedules several months in advance: they usually arrive at fixed times to unload and load goods in North Sea Port. A timely passage through the lock in Terneuzen is of vital importance to these liner services.

Also, their lock passages were confirmed 24 hours in advance instead of the usual 6 hours.

Nine out of ten lockages as scheduled

During the trials no less than 90% of the incoming and outgoing lockages of ships through the lock were on schedule. On the one hand, 60% of the lockages was in accordance with the 4-month schedule. On the other hand, 30% was carried out according to the schedule or changes made until at least 24 hours before the lockage. Incidentally, this method did not affect other ships scheduled for lock passages at shorter notices. Any anticipated lockage jams can now be processed sooner, so that shipping guides need less time to ensure smooth passages. In addition, pilotage and towing services and other nautical service providers will receive schedule information much earlier for optimal use of their resources.

The trials showed that early scheduling of lockages is possible and beneficial. North Sea Port will gradually introduce this new method of planning for other vessels, in cooperation with those involved in the nautical chain. Early schedules based on reliable departures will then be the standard for vessels for destination North Sea Port.

The increase of vessels and economies of scale over the past ten years provide the challenges to set up lockage schedules that link up with logistics chains and production units in the port. Also, since May 2019, the Terneuzen locks have had to deal with restrictions on the use of the Middensluis because of the construction of the Nieuwe Sluis. As of the beginning of 2022, in the last straight line of the construction work, the Middensluis will even be completely out of service. 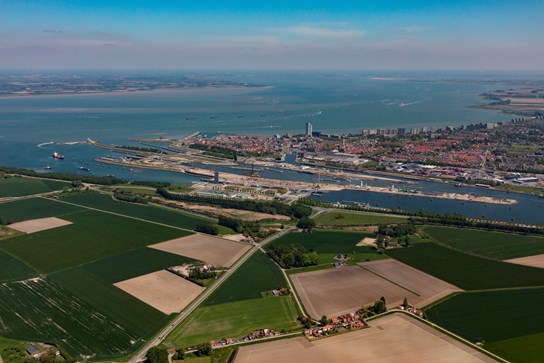