During the first nine months of this year, the North Sea Port companies recorded transhipment of goods by sea of nearly 57 million tonnes. This is a 9.3% increase. Transhipment of dry bulk, general cargo, ro-ro and liquid bulk all improved significantly.

Dry bulk, general cargo, ro-ro and liquid bulk on the up

Transhipment by sea increased by 4.8 million tonnes (+9.3%) during the first nine months of this year to 56.9 million tonnes compared to the same period in 2021.

General cargo recovered strongly with an 11% growth (+0.8 million tonnes) and clocks in at 7.7 million tonnes. More than half of this increase was achieved by trade in steel plates.

Container transhipment declined 8.9% in the first three quarters of 2022, reaching 1.7 million tonnes compared to the same period in 2021. This mainly concerns a decrease in the transhipment of fruit and vegetables not transported by container but as break bulk.

Inland navigation transhipment also on the up

For the first nine months of this year, transhipment via inland navigation also recorded an increase, plus 8.4% (3.7 million tonnes) to 48 million tonnes. This increase was, to a large extent, due to an increase in cargo traffic during the second quarter.

During the five months, March to July this year, immediately following the start of the war in Ukraine, many companies stockpiled large amounts of goods. This was because of limited exports from Ukraine and EU embargoes on goods from Russia such as coal and wood.

Daan Schalck, CEO North Sea Port: “Uncertainties on the geopolitical stage therefore cause (temporary) spikes in supply streams in certain segments. The drop in trade with Russia will be compensated by additional transhipment from mainly the United States, Canada and Finland. Russia may then cease to be the first trading partner by the end of this year.”

Ukraine also logically drops further down the list of trading partners despite the supply of grain since early September through the grain corridors set up by the United Nations. A total of 0.4 million tonnes were traded, well below the one million tonnes in the same period in 2021. The declines are in maize, animal feed and iron ore.

Growth in cargo traffic by sea and inland waterway occurred strongly during the second quarter of this year. During the third quarter, growth slowed down. It is expected to continue like this in the months to come. 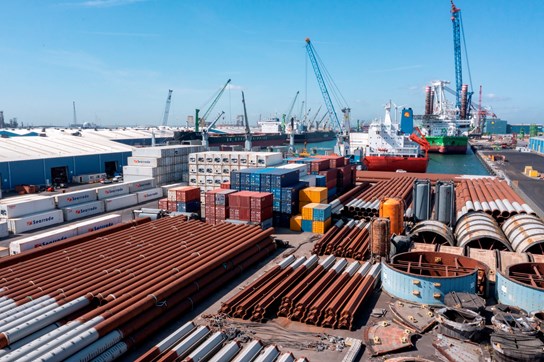