Operational costs remained under control in 2018 – thanks to the first synergies resulting from the merger – and totalled 50 million euros. This is 2% lower than in 2017, despite the fact that the maintenance and management costs of infrastructure increased by 1.7 million euros to reach a total of 10.9 million euros. Consequently, the operational result rose by 8% as well, to 54.8 million euros. Net profit amounted to 26.4 million euros.

The extremely positive operational cash flow of 37.1 million euros made it possible to meet the financial commitments in connection with the decontamination of the Thermphos premises and the Nieuwe Sluis in Terneuzen in full. Expenditures, investments in infrastructure in particular, resulted in a slight negative cash flow of 4.6 million euros.

Positive sign for further development of the port area

As with revenue in general, North Sea Port is seeing gradual growth in land turnover from concessions and long-term leasing, along with a rise in the volume of transshipped goods. The fusion port views this as a positive sign with regard to the further, future development of the cross-border port area. The first months of 2019 have demonstrated a continuing trend in these positive results for now, although the increase in transshipment and revenue compared to 2018 so far remains limited.

North Sea Port is a cross-border port area that is 60 kilometres long. The area stretches from Vlissingen past Terneuzen in the Netherlands and some 32 kilometres inland to the Flemish (Belgian) port city of Ghent. 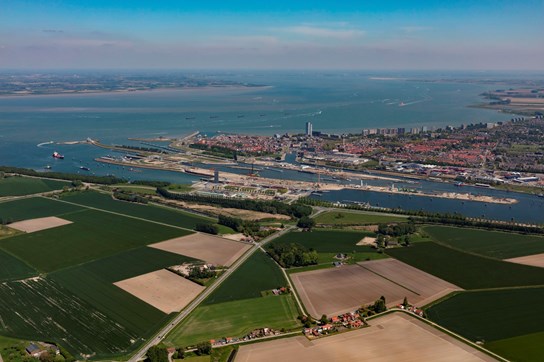