Several times every week Volvo Cars in Ghent ships vehicles from North Sea Port by rail to China, Italy and Austria. The first train carrying 190 XC60s from China arrived at the Interface Terminal Gent (ITG) in Kluizendok on Thursday 4 July.

The train will return with 180 XC90s, V90s and V60s to the Chinese port of Xi’an. The new rail connection from Ghent fits in with Volvo Cars' strategy for faster, more sustainable and more cost-effective operations, in terms of production as well as from a logistics point of view. Exporting part of the cars by rail instead of by sea or road, reduces the impact on the environment. Also, the cars will reach their destination faster. The lead time from factory to final destination can be shortened by half.

North Sea Port has the aim to stimulate transport by rail and by water. “Volvo Cars makes full use of the good hinterland connections of North Sea Port in Ghent by opting for sustainable rail transport to the European inland countries and China. It will strengthen our position as a multimodal port," says Daan Schalck, CEO of North Sea Port.

Fewer trucks on the road

Trains to Italy are loaded and unloaded at the DFDS terminal at Mercatordok. China trains arrive and depart from the Interface Terminal Gent (ITG) in Kluizendok. Rail operator Lineas manages the rail exports from North Sea Port to China and Italy. Through its modal shift to rail Volvo Cars takes around 5,000 trucks off the road every year. A train will run twice a week from North Sea Port to Xi'an in China.

Volvo Car Ghent is a car factory in the port of Ghent, owned by Volvo Car Corporation. It consists of a welding plant, spraying plant and a final assembly plant. With 6,500 employees, it is one of the largest industrial employers in East Flanders. In 2018, Volvo Car Ghent produced 200,396 cars. These are the V40, XC40 and V60 models. 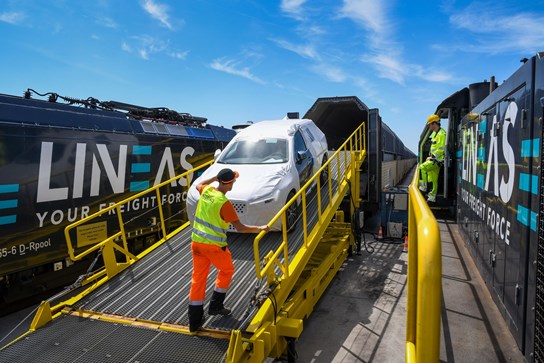