GHENT – Ten private- and public-sector partners will at 12 pm on Wednesday 21 October mark the launch of the North-C-Methanol project. Together they will reduce annually the CO2 emissions by 140,000 tons.

They will also generate 44,000 tons of “green” methanol locally, which can be used as feedstock for the chemicals and renewables industries, as well as fuel for ships and trains. This CO2 reduction is equivalent to the carbon absorption of around 6 million trees per year. This is a world-class project and is expected to have the largest renewable hydrogen-to-methanol complex in the world.

North-C-Methanol is the first large-scale demo plant which is part of the North-CCU-Hub programme, and right now represents an investment of EUR 140 million. The North-CCU-Hub programme has the long-term aim of realising an overall annual reduction in CO2 emissions of 1 million tons in North Sea Port. Today the ten private- and public-sector partners signed the formal collaborative agreement for the North-C-Methanol project. That demonstrates the need for a sustainable perspective for the future. The private partners, together with PMV, will contribute a large part of the investment, and Flemish and European support is also being looked at.

Largest plants of their kind

North-C-Methanol entails the construction of two large-scale demo plants and supporting infrastructure on the Rodenhuize peninsula in North Sea Port. The first plant, a 65-MW electrolyser, is being erected on the ENGIE site. This hydrogen plant will convert water into green hydrogen and oxygen using wind power. Cedric Osterrieth, Director of thermal activities in Europe of ENGIE, says it is a logical choice. “We already have a direct, high-voltage grid link with renewable energy generated by the North Sea winds. We can use this energy to produce hydrogen, which in turn can serve as a renewable raw material.”

The second plant, a Proman methanol plant on the Rodenhuize peninsula, will use this green hydrogen to convert the collected CO2 emissions of major local industrial players, such as ArcelorMittal and Alco Bio Fuel, into green methanol, also known as renewable methanol. The local chemicals and renewable fuel industries, such as Cargill, can in turn use the methanol as a “green” raw material and/or as a green fuel for marine vessels and railroads. David Cassidy, CEO of Proman, says: “We are excited to further develop methanol’s potential as a clean fuel for the future. Green methanol presents a significant opportunity to bridge the gap from fossil-based to renewable energy.”

The North-C-Methanol project is a landmark example of sustainable industrial symbiosis: raw materials are extracted locally, and finished products and secondary flows are used locally. A new, circular economy will be created in North Sea Port: waste from one enterprise will be used as a raw material by another one. All by-products of the methanol production process, such as oxygen, heat, and water, will also be recycled locally. This will ensure a unique and far-reaching industrial and circular integration. Of course, this will fully go hand in hand with the building of much supporting infrastructure, such as new pipelines and storage tanks, in order to transport raw materials, by- and finished products to the correct location. Fluxys and Oiltanking are to be responsible for this, with Mitsubishi Power overseeing the integration and coordination of the entire construction process.

“This project shows why Flanders can become a leader in sustainable innovation. With our ports and their industry, we are ideally positioned to invest in a circular and sustainable industry. It provides sustainable growth and new jobs and with this type of project we make a leap forward to a resilient Flanders. Moreover, it is also a step in the direction of becoming less dependent on fossil raw materials from abroad”, explains Flemish deputy prime minister Hilde Crevits.

The Ghent part of North Sea Port is the ideal location. There is a large quantity of industrial CO2 emissions to be captured, a high-voltage link, plus many potential buyers of green methanol. “This collaboration means we are consolidating our position in the sphere of the circular economy which already exists in the port”, explains CEO Daan Schalck of North Sea Port. “The port also has at its disposal extensive logistics activities, a massive storage capacity and links via the sea, inland shipping, rail, and road.” Additionally, there exists within the North-CCU-Hub significant expertise in the field of chemical (bio-) technology. The City of Ghent and the Province of East Flanders are assisting in the facilitation of the project. PMV also supports the financial section.

Impact on a global scale

Besides the highly advanced integration of the various processes and among differing industrial partners, the North-C-Methanol project is also unique owing to its scale and its programme of innovation in the medium and long term. Indeed, it is expected that the electrolysis capacity will be six times greater than the largest system currently in use in the world.

North-CCU-Hub expects a gradual increase of the North-C-Methanol capacity from 65 MW in 2024 to 600 MW in 2030, as part of an evolving programme whereby new technologies, markets, and products such as ammonia, formic acid, fatty acids, esters, and proteins will gradually be developed and integrated. Expert partners UGent, Bio Base Europe Pilot Plant, CAPTURE, and the Flemish spearheading clusters Catalisti and Flux50 are shaping these innovation pathways. 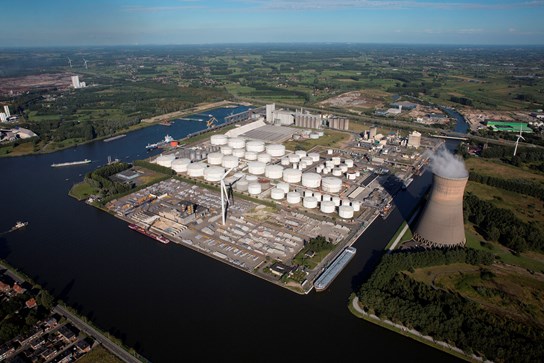