New container incentive for North Sea Port. On Tuesday 17 September 2019, MSC is sending a ship directly to Kloosterboer Flushing for the very first time. The world’s number two in the maritime transport of containers will include Kloosterboer in its network every week.

This is the first direct call by shipping company Mediterranean Shipping Company (MSC) in the port area of North Sea Port. On Tuesday, September 17, its container ship "MSC Alabama" will dock at Kloosterboer in North Sea Port to load containers. It will expand North Sea Port’s position in the container segment and strengthen it as a "food port". The container vessel is 242 meters long, 32 meters wide and has a capacity of 3,400 TEU. It sails the Angola Express Service route.

From Russia to West Africa

MSC will use the ship on a service connecting Flushing with West Africa. “By including Flushing in MSC’s Angola Express Service route, North Sea Port is connected to Senegal, Guinea and Ivory Coast as well as to the network of all other worldwide scheduled MSC services," said Jan van der Graaf, Reefer General Manager for MSC. Along the way, the ships of the Angola Express Service will also serve other ports. The route runs from St. Petersburg via Antwerp via Flushing to Le Havre, Sines, Las Palmas, Dakar, Conakry, San Pedro and Lome to Luanda. With Flushing North Sea Port is now on that list.

To North Sea Port this is the second container service to West Africa. The French shipping company CMA CGM has been calling at Flushing on that route for some time. CMA CGM is the fourth largest container operator in the world. And now MSC, the world’s number two, will also call at North Sea Port. “MSC coming to us proves once again that the container sector does not regard North Sea Port for inland shipping or for intra-European shortsea traffic only. We can also play a role in deep-sea container transport with ships bridging the gap between two continents. This expansion of our container line services, means that we offer more options for transporting cargo,” explains Daan Schalck, CEO of North Sea Port. In addition to this transatlantic container service, North Sea Port has container lines in the United Kingdom, Scandinavia and Central America.

Mediterranean Shipping Company (MSC) is one of the world leaders in container transport. Its fleet has more than 550 ships with a total capacity of around 3.6 million TEU. They operate on 200 routes, connecting 500 ports and their annual transports amount to approx 21 million TEU. The shipping company with Italian roots and headquarters in Geneva, Switzerland, currently operates the largest container ship in the world: the MSC Gülsün. It has a capacity of no less than 23,756 TEU and is 400 meters long and 62 meters wide. 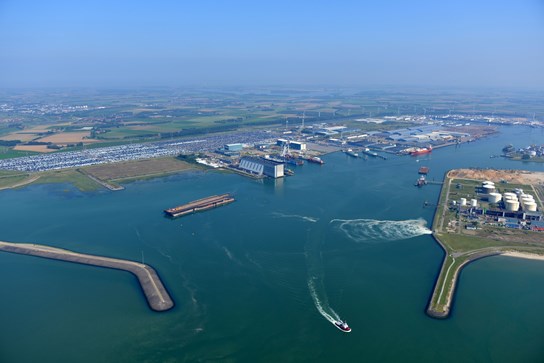