Large-scale potential for green hydrogen in the Scheldt-Delta region

The SDR partners Dow, Yara, Zeeland Refinery, PZEM, ENGIE, ArcelorMittal, Ørsted and North Sea Port have investigated the potential of large-scale production and use of green hydrogen in the Scheldt-Delta region. The conclusion: the region is extremely suitable.

The study, carried out by Arthur D. Little, catalogued the possible locations and system integration of large-scale electrolysis for green hydrogen production. Various locations in the North Sea Port zone are suitable for large-scale electrolysis. The development of four locations has already got off to a good start, including locations in Vlissingen, Rodenhuize and in Sluiskil, where Yara and Ørsted earlier this week announced that they will be working together.

Smart Delta Resources (SDR) is an international partnership of energy and resource-intensive companies in the Scheldt-Delta region dedicated to achieving a sustainable future for industry. An example of SDR's concrete, innovative projects is the ambitious Hydrogen Delta programme focused on the large-scale production of green hydrogen. There are enormous opportunities here to phase out existing natural gas-based hydrogen consumption and reduce CO2 emissions (the current emissions of the SDR region are over 22 million tonnes per year). The region is the largest hydrogen producer and consumer in the Netherlands and Flanders. The production and demand for industrial hydrogen has the potential to grow to over 1.2 million tonnes per year by 2050, comparable to total Dutch hydrogen production in 2020.

Ready for large-scale and rapid implementation

The study confirms that the region has a strong starting position for large-scale, rapid implementation of green hydrogen production. Current hydrogen consumption (580,000 tonnes of H2/yr) in the region accounts for more than a third of the total amount consumed by Dutch industry. Close collaboration between industry, the port and public authorities is facilitating the direct use of hydrogen as a raw material. The region already has a large, flexible range of steam methane reformers (SMRs) to balance out the non-continuous green hydrogen output from electrolysers. The oxygen produced during electrolysis can also be sold locally to steel producer ArcelorMittal, Zeeland Refinery, Dow and Yara, among others.

The region is conveniently close to various renewable energy facilities. The proximity of offshore wind farms means it will have direct access to thousands of megawatts of wind energy (Borsele I-II-III-IV wind farm and possibly IJmuiden Ver Alpha). It also benefits from access to CO2-neutral electricity for the production of hydrogen from the Borsele nuclear power plant. Moreover, the region already has a high-quality gas/380 kV electricity infrastructure in the Sloe region (Vlissingen) and Rodenhuize (Ghent) with cross-border potential for balancing electricity (Belgium and the Netherlands). Finally, there are excellent opportunities for connection to a national H2-backbone and for the creation of a hydrogen hub in the North Sea Port zone, with opportunities for hydrogen import, storage and transportation.

Ambitions for a green energy and hydrogen cluster

The SDR region opted to develop the transition path for hydrogen at an early stage (SDR Roadmap 2018), and this was formalised in the Hydrogen Delta programme. SDR wants to position the region as the largest green energy and green hydrogen cluster in the Netherlands, Flanders and Europe. It is actively implementing Europe's climate aims for 2030 and is seeking to achieve a competitive, climate-neutral industrial sector in the region by 2050. The aim of remaining an international frontrunner in the industrial hydrogen economy will require support from regional and international governments: it will not be possible to produce green hydrogen cost-effectively without subsidies before 2030 (as is the case worldwide).

The study was facilitated by a grant from the Province of Zeeland under the Zeeland in Stroomversnelling scheme. 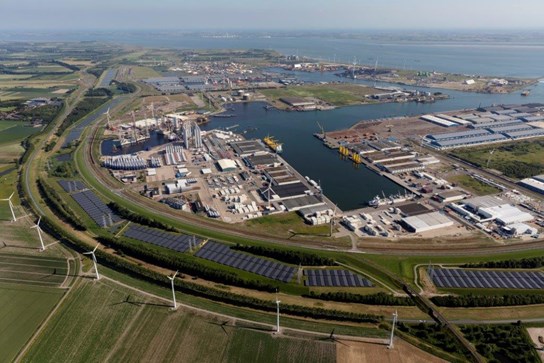