Belgian rail operator Infrabel and the federal government are to invest an additional €33.5 million in the Ghent part of North Sea Port in the coming years. A substantial number of new tracks and modifications will provide faster access to the terminals and better access to the European hinterland.

In order to achieve the ambitions of Infrabel and North Sea Port, major investments in rail infrastructure are being made at both Kluizendok on the left bank of the Ghent-Terneuzen Canal and Mercatordok on the right bank.

At Kluizendok, the existing sidings for marshalling freight trains will be extended from four to eight tracks, each 750 metres in length. It may even be expanded further to 16 tracks in the future. In addition, a new ring line will be constructed that will connect the ITG container terminal beside the canal and provide better access to the businesses around the dock. Finally, a study will be carried out into constructing a new section of track to connect Kluizendok with the existing line to Terneuzen.

The sidings near Mercatordok will also be expanded: the six existing tracks will be extended to 750 metres, in part to accommodate container trains. The expansion will give adjacent businesses such as Volvo Car Gent and Stukwerkers easier access to the Ghent-Gothenburg scheduled service operated by DFDS and increase rail capacity.

In addition to the investments near Kluizendok and Mercatordok, Infrabel will also be upgrading a number of existing connections. Moreover, Infrabel foresees the possibility of additional track connections in the port.
The expanded rail infrastructure at Kluizendok and Mercatordok will facilitate increased freight transport in the long run. That traffic will pass through the nearby Ghent-Zeehaven marshalling yard. Several sets of points are also being upgraded there.

These investments will go hand in hand with the elimination of level crossings on the L204 line on the right bank adjacent to the R4-East. In the future, this line could be extended to Terneuzen and cross the R4-East by the ArcelorMittal plant. Money has also been earmarked to fund a study into this.

As of May this year, three existing tracks will have been extended to a length of 750 metres, which is the European standard. This is in line with the steps North Sea Port is taking to maintain its development as a true multimodal port in which transport between the port and the European hinterland can move seamlessly from inland waterway to rail or road.

Benoît Gilson CEO of Infrabel:"The investments in North Sea Port's rail infrastructure are a clear signal on the part of the federal government and Infrabel. Rail is the future. Making a success of the modal shift for goods transport starts in the ports, it starts here. Together with North Sea Port, we will soon be organising an event at which we will present our plans to all the companies and stakeholders involved. I am very much looking forward to telling this inspirational story."

Daan Schalck, CEO, North Sea Port: "Infrabel's significant rail investments in our port will allow companies to transport goods smoothly by rail. Together we will ensure that North Sea Port has future-proof infrastructure as a multimodal European port." 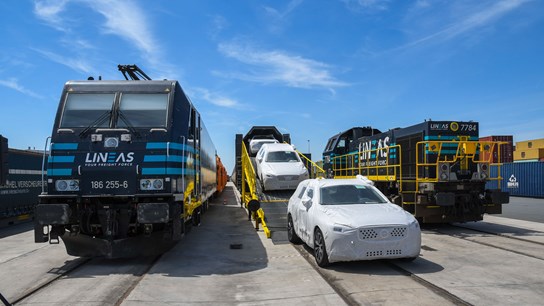