ArcelorMittal Belgium invested 13.3 million euros in two new customised port cranes. The biggest of the two cranes, which has a maximum height of no less than 85 metres, sailed passed the Lock of Terneuzen on Wednesday 27 February.

By bringing in the two cranes, the company is preparing for the arrival of the New Lock in Terneuzen. By 2022, the first vessel will sail through the larger lock, making Terneuzen, Ghent and the ArcelorMittal Ghent company port accessible to major Capesize seagoing vessels - vessels that have a loading capacity of no less than 120,000 tons.

North Sea Port is of course delighted with this investment, which the company is using to ‘anchor’ itself even further into the port.

As part of this project, ArcelorMittal ordered two new port cranes. The first crane was commissioned in 2016 and is used to unload barges containing coal and minerals etc. The second crane, a grab crane, is used to unload raw materials from Capesize seagoing vessels. This new crane has a lifting capacity of 50 tons, a waterside reach of 40 metres and an unloading capacity of no less than 2000 tons per hour.

The crane will be delivered by Italian supplier ‘Danieli’. The design and concept of the new crane is based on the knowledge and experience of the ArcelorMittal Ghent project team.

The crane was constructed in Vitoria, Spain, and was assembled and tested in the port of Bilbao, where it was loaded onto a pontoon in mid-February. On 27 February, the crane was sailed into the Ghent-Terneuzen canal, in the direction of the Kluizendok in Ghent, where it will spend 10 days being prepared for unloading on the ArcelorMittal Ghent quay. This unloading onto the quay will take two days to complete.

ArcelorMittal Belgium, which has branches in Ghent, Liège, Genk and Geel, has over 5000 employees. The total number of direct and indirect jobs is estimated to be 13,000. The company manufactures high-quality steel for a wide range of applications in the automobile sector, as well as other industrial sectors such as the construction sector, the white goods sector and the packaging sector. 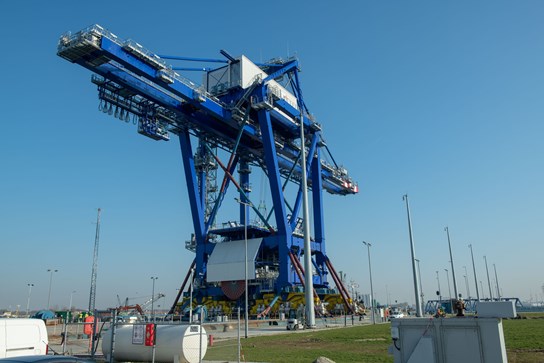