North Sea Port has once again confirmed its reputation as a dry bulk port. The port won the award for ‘Best Dry Bulk Port’ at the prestigious IBJ Awards ceremony in Rotterdam.

North Sea Port was able to justify its nomination by taking home the trophy awarded by the ‘International Bulk Journal’ (IBJ). The shortlist included Hamburg and the UK's PD Ports. The winner was announced on the evening of Monday November 22 at the World Port Center in Rotterdam.

In fact, it is no surprise that North Sea Port should win this award for ‘best dry bulk port’.

North Sea Port is a leading port in Europe for dry bulk. Just over half of the 70 million tons of goods loaded into and out of seagoing vessels within North Sea Port fall into this category. This includes a wide range of products, from ores, coal, grains and seeds, fertilizers and minerals to scrap metal, blast furnace slag, wood pellets, salt and construction materials such as cement, sand and gravel. Those goods come to North Sea Port from all over the world.

In this regard, North Sea Port is more than a conduit – these flows of goods are very strongly anchored locally. They feed the many factories located in the port area and consequently provide a lot of jobs and added value.

Those industrial players and the many specialist port companies, along with North Sea Port, continue to invest on an ongoing basis. They put money into building the right infrastructure and ever more efficient terminals and equipment for handling and storing those goods, as well as into sustainability and security. Recent examples include the construction of the new quay wall at Bulk Terminal Zeeland in Vlissingen and the building of the world's tallest and most modern production tower for sea salt at Zoutman in Ghent.

Not the first award

This is far from the first such award for North Sea Port. Its trophy cabinet already boasts two international awards for best tank storage port, as a hub for wet bulk. Which proves once again how versatile the port really is.

Its central and inland location, draught of up to 17 metres and notable multimodality, with a strong role for inland navigation and rail and access to congestion-free hinterland links all add to the picture for North Sea Port. The New Lock in Terneuzen will reinforce those trump cards by opening the door to the Ghent-Terneuzen Canal Zone for larger bulk carriers. 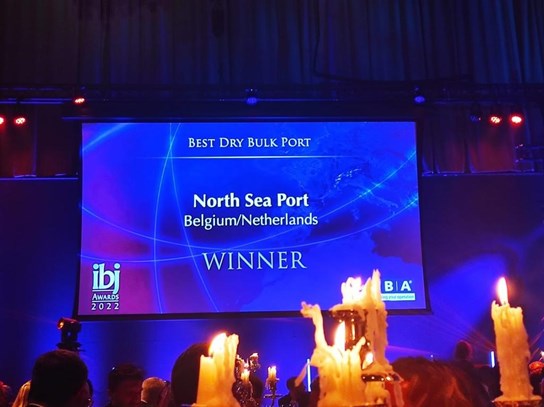