Heylen Warehouses has found a major customer for its Ghent Logistic Campus at the Rieme-North business park in North Sea Port. AGP eGlass, a producer of high-tech glass for the automotive industry, is leasing 70,000 m² of warehouse space there.

Heylen Warehouses marked the start of the final phase in the construction of its Ghent Logistic Campus in April of this year. It will soon provide a total of 150,000 m² of distribution and storage warehouses that meet the highest standards of sustainability and innovation. Three customers are already operating on the campus, which will be completed in the autumn. Even before that deadline, the logistics property developer has secured an additional customer for a massive 70,000 m² – representing almost half of the total available space at the site in Rieme-North.

The newcomer is AGP eGlass. AGP is a global player in specialised glass applications for vehicles. Following the acquisition of competitor Soliver in 2018, the group also has a solid foothold in Belgium. AGP's global headquarters have been located in Ghent since the start of this year. The eGlass division was established in 2015 and focuses specifically on smart and innovative solutions for electric and self-driving cars. It now has more than twenty customers in the automotive sector.

Keeping up with growth in that market and supporting expansion in Europe also requires a solid logistics organisation. By moving into the Ghent Logistics Campus at North Sea Port, AGP is meeting that challenge.

Alongside space for distribution, storage and light assembly activities, thanks to its strategic location the Heylen Warehouses site also provides an excellent base for serving markets like Germany, France and the Netherlands. Added to this is the immediate proximity of multimodal hubs at the intersection of roads, railways and waterways to the European hinterland.

The new contract demonstrates once again just how attractive North Sea Port has become for logistics projects. In recent years, numerous major players in logistics and real estate have announced the construction of new and often large-scale logistics platforms there.

This translates not only into thousands of square metres of warehouses and increased flows of goods but also into many hundreds of new jobs. Reason enough for North Sea Port to maintain its focus on value-added logistics activities, distribution and warehousing. 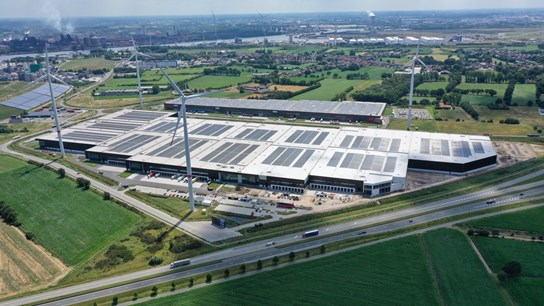