Valuepark Terneuzen, the joint venture between Dow Benelux and North Sea Port, has awarded Gutami Holding a contract to build and operate a 50 MW solar park. The 30-hectare solar park will be realised on the Valuepark Terneuzen premises at the Braakmanhaven.

With the solar park's arrival, Dow and North Sea Port are supporting efforts to increase the sustainability of Zeeland's energy supply. The solar park will generate sustainable solar power for over 12,000 households and is expected to be operational in mid-2020.

The site is part of the Valuepark Terneuzen premises at the Braakmanhaven. Thirty hectares of this land will be used to build a solar park that will generate solar power for the next fifteen years. “The green power supply at Valuepark Terneuzen will make the site even more attractive to new businesses looking to set up shop,” explains the Director of Valuepark Terneuzen, Geerten van Dijk.

“With this locally-produced solar energy, Dow is taking steps to enhance the sustainability of its energy supply. Thanks to solar panels, heat pumps and the green power from the solar park, the new office building the ‘Dow Terneuzen Diamond Center’ will now be able to meet 100% of its energy needs using locally-generated power,” says Anton van Beek, President of Dow Benelux. “This is an excellent match for Dow's ambition to ensure a large portion of the electricity it uses is generated through sustainable means by 2025.

North Sea Port will have a special role to play in the construction of the solar park. The majority of materials used to build the solar park will be arriving by seagoing ship. These goods can be unloaded in Terneuzen.

“We already have a number of solar parks in North Sea Port, on both sides of the border. These represent a total of 110 MW in installed capacity, which is equivalent to the annual energy consumption of 28,000 households. The addition of this park will enable us to further expand our sustainable energy supply, contribute to the energy transition and therefore reduce our CO2 emissions,” according to Jan Lagasse, CEO of North Sea Port.

In early 2019, the Groningen-based Gutami Holding was contracted to build and operate the new solar park. During the realisation of the park, Gutami Holding will cooperate closely with Honeywell in connection with delivery of the materials.

“Even though from where we are in Groningen, Terneuzen is the on the far side of the Netherlands, we are proud to have the opportunity to realise this solar park at such a unique location. We were pleased to cooperate with local contractors for the construction work. Residents of Terneuzen and surrounding municipalities will be offered the chance to take part in a bond loan,” says Gerben Pek, CEO of Gutami Holding. 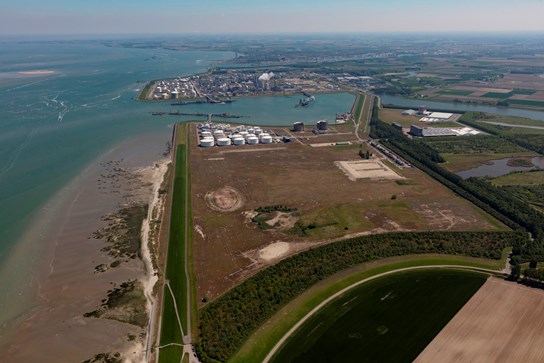