Gasunie and North Sea Port have signed an agreement to develop a regional transport network for hydrogen in Zeeland.

This 'Hydrogen Delta Network NL' will build on the region's existing position for hydrogen and is intended to take shape over the coming years. The next step will be to connect this regional infrastructure to the national Dutch and Belgian hydrogen infrastructure.

Many companies in Zeeland are taking the action required to contribute to the climate objectives for 2030 and 2050. Hydrogen is an essential component of the energy mix of the future. Hydrogen is not new to Zeeland. At 520,000 tons per year, the Zeeland industrial cluster currently accounts for 35% of the demand for hydrogen in the Netherlands.

In order to achieve a regional hydrogen infrastructure, the market needs to develop and additional activities are also necessary. For example, work is ongoing on electrolysis, using sustainably generated electricity to produce hydrogen without CO2 emissions. Several electrolysis projects have already been announced in Zeeland, in which this so-called 'green' hydrogen will be produced from sustainable electricity, mainly from wind. In addition to the development of large-scale electrolysis, the region also offers excellent opportunities for importing hydrogen via locations in the North Sea Port area.

Connections with Belgium, the Netherlands, Germany and further afield in the future

Developments in the supply and demand for hydrogen in Zeeland are concentrated in the industrial sector in Vlissingen, which accounts for most of the supply, and in the Ghent-Terneuzen Canal Zone, where the main consumers of hydrogen are located. In the coming time, the best method of connecting Vlissingen and Terneuzen will be explored. The region offers opportunities for the reuse of existing natural gas pipelines (via land) but also for crossing the Western Scheldt (possibly a combined crossing including several types of pipelines and cables).

Simultaneously with the development of the Zeeland hydrogen network, North Sea Port is developing a similar regional network in Belgium together with gas transport company Fluxys and ArcelorMittal. By the end of 2025, the hydrogen infrastructure in the delta region will be ready.

The Zeeland network is expected to be connected to the national hydrogen infrastructure that Gasunie is developing in the Netherlands in 2027. This backbone will not only connect the Dutch industrial clusters, it will also have connections with hydrogen storage facilities in the Northern Netherlands, Germany and other parts of Belgium. The project and its expansion fit seamlessly within the hydrogen strategy that the Dutch government recently presented at the state opening of parliament, which will involve investing in the hydrogen infrastructure in the Netherlands.

Hydrogen Delta Network NL aims to facilitate the growth of the demand for and supply of hydrogen by businesses in the Zeeland region. To do so, it is taking a number of steps. Via an 'Expression of Interest’, the specific activities, wishes and requirements for supply and demand are being identified in terms of capacity and volume. This will help to inform the choice of pipeline capacity, dimensioning and routing. Based on the results, the route for the regional hydrogen network will be finalised in early 2022. The necessary investment decisions will then need to be taken by the end of 2022.

The Hydrogen Delta Network will be 'open access' and 'non-discriminatory': it will be accessible to all companies wishing to market hydrogen at scale. Companies interested in the possibilities of the regional hydrogen infrastructure can contact Gasunie or North Sea Port. 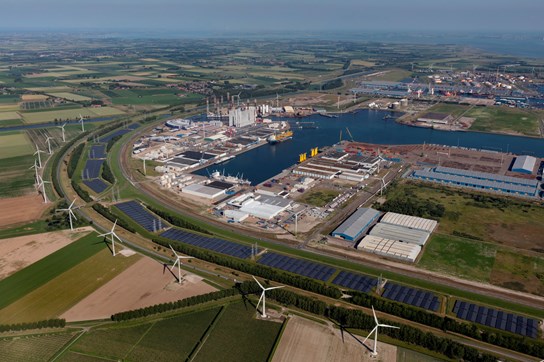