Volvo Cars has started production of its all-electric car at its North Sea Port plant. It marks an important milestone in Volvo Car’s ambition to reduce the CO2 footprint per car by 40% by 2025.

Demand for the XC40 Recharge P8 - the name of the first electric Volvo - is high. Every car to be produced in Ghent this calendar year has already been sold. And orders keep coming in. The first fully electric XC40s will be delivered to customers in Europe this month.

Hilde Crevits, Flemish Minister of Economy, Innovation and Work, was present at the start of production on Thursday 1 October and sat at the wheel of the very first customer-sold XC40 Recharge P8.

The four-wheel drive electric Volvo has a range of more than 400 km and an output of 408 hp. Its fast charging system charges the battery up to 80 percent of its capacity in about 40 minutes. In order to start production, all production workers involved were given extensive training, with the support of the Flemish government. As many as 6,500 employees are employed at the Ghent plant, which makes Volvo the largest industrial employer in East Flanders. In 2019 Volvo Car in Ghent produced 206,225 cars. Ghent produces the models XC40 and V60.

By 2025, Volvo Cars expects 50 percent of its worldwide sales to be fully electric cars. The remaining cars will be hybrid cars. Volvo Car is also committed to continuing to reduce its carbon footprint, with a view to being climate-neutral by 2040.

Connections with the automotive industry

The production of this type of car is a milestone for Volvo Car Ghent and means a stronger connection between Volvo and North Sea Port. The port will maintain its automotive sector, which is quite a boost in these corona times. Together with the assembly plant of Volvo Truck, the import and export of Honda cars and the shipping of numerous car makes, this sector provides a multitude of jobs in and around the port area, in particular in Ghent and Vlissingen.

Volvo Car Ghent is part of Volvo Cars Group, which has 41,500 employees worldwide. Volvo Cars has been owned by the Chinese Zhejiang Geely Holding since 2010. Head offices, product development, marketing and administration of Volvo Cars are mainly located in Gothenburg, Sweden. Volvo Cars headquarters for the Asia-Pacific region is located in Shanghai. The company's largest car plants are in Gothenburg (Sweden), Ghent (Belgium), South Carolina (USA), Chengdu and Daqing (China). Engines are manufactured in Skövde (Sweden) and Zhangjiakou (China). Bodywork components are produced in Olofström (Sweden). 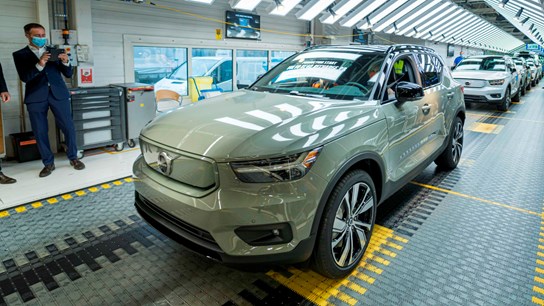