The issue of green Guarantees of Origin for hydrogen in the Netherlands has started as of October 2022. Netherlands is the first country in Europe with such a system.

The associated system was evaluated in recent months in a pilot by hydrogen exchange initiative HyXchange in cooperation with Vertogas, the certifying body for biogas, now also for green hydrogen. A total of eighteen market parties participated in this successful pilot (practical test). HyXchange aims to rapidly expand certificate and hydrogen trading, aimed to also facilitate trade between European countries and hydrogen imports from countries outside the EU. The pilot assessed the practical functioning of the system which market parties can use to register their hydrogen for a green Guarantee of Origin.

These Guarantees of Origin can also be converted into renewable fuel units (RFUs) for traffic and transport: an attractive market because of the corresponding objective. Finally, we looked at the trade in these Guarantees of Origin. A standard trading contract is also being developed for this purpose together with European energy traders. This also makes it possible to start hydrogen trading quickly, as envisaged by HyXchange. HyXchange is thus contributing to the energy transition and the growth of renewable energy as well as reducing the natural gas dependence in the Netherlands.

The certificates are Guarantees of Origin, which guarantee that the hydrogen is produced from green electricity. This will allow any consumer to verify whether the hydrogen was indeed produced in a sustainable manner. The Netherlands has passed a law on the subject as a national elaboration of a European directive. Vertogas B.V., the company that already provides Guarantees of Origin for green gas and has been designated by the Minister to do the same for hydrogen, has recently been creating a certification system suitable for this new task.

Currently, the system is only a Dutch system and therefore only valid within the Netherlands. This makes the Netherlands the first country to implement this system. A more international system of hydrogen certificates based on European regulations, which is still under discussion, is expected later. HyXchange calls for a speedy regulation to certify hydrogen imports from other countries, important for our climate goals while also reducing the amount of natural gas we need.

About the HyXchange hydrogen exchange initiative

The HyXchange trading platform is an initiative of Gasunie and the Port of Rotterdam Authority, Port of Amsterdam, Groningen Seaports and North Sea Port. Gasunie and the Dutch ports will play a crucial role in the hydrogen economy.

The HyXchange hydrogen exchange initiative is now being followed with great interest by a circle of 60 market parties active in energy and industry. The objective is to create a hydrogen exchange on the Dutch hydrogen infrastructure as a central trading point and price indicator, both nationally and internationally.

More information on the pilot and HyXchange is available on the website. 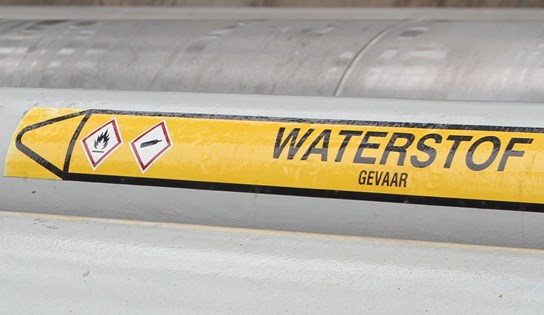