Shifting goods transport in and around the port from road to rail – that is what Infrabel and North Sea Port will be working intensively to achieve in the coming years. The aim is to increase the volume of rail traffic by half.

To underscore the partnership, the Federal Minister for Mobility, Georges Gilkinet, and Infrabel CEO Benoît Gilson paid a working visit to North Sea Port on Thursday 7 October. Together with the CEO of North Sea Port, Daan Schalck, Infrabel signed a declaration of intent to establish Railconnect, a port railway team with representatives from Infrabel and North Sea Port. Minister Gilkinet has welcomed the plans to work together.

North Sea Port and Infrabel will together map out the short, medium and long-term requirements in terms of track in the Ghent part of the port area. This will involve looking at which sidings require the addition or extension of tracks, where electrification is appropriate and where there is a need for automatically operated switches and automatic signals.

The study will also explore how the infrastructure can be optimally and efficiently operated based on the needs of rail customers such as industry and shippers, as well as possibilities for working more simply and flexibly within the port area in terms of charging and train operations, for instance by managing rail traffic more efficiently.

Additionally, changes to parking policy are envisaged to enable more efficient rail traffic – for example, preventing trains from remaining stationary for days or weeks in the most heavily used sidings. This will free up those sidings for receiving and putting together trains. In addition, specific measures are being explored for the port railway network across the Belgian-Dutch border.

Daan Schalck, CEO North Sea Port: “By means of operational optimisations of rail traffic and investments in rail infrastructure, we will ensure that we as a port continue to have sufficient capacity to accommodate the increasing transport of goods by rail. This will also allow investors to make greater use of the rail network."

Georges Gilkinet, Federal Minister for Mobility: "The federal government wants to double the volume of goods transported by rail throughout the country by 2030. This is good for jobs, mobility and road safety: one freight train means 50 heavy trucks off the road. More trains and fewer trucks for freight transport from the North Sea port is good for the climate as well, as it contributes to the goal of reducing 55% of CO2 emissions by 2030. Lastly, it's good for the economy: every euro invested in the railways means three euros in return. Now is the time for the federal government to invest more in the railways. Trains connect people, they connect the ports in the north of our country with the factories in Wallonia and southern Europe... and links the railways with the sea, between Infrabel and the North Sea Port for more sustainable transport. Today, I see that the port is already taking huge steps to become more sustainable in terms of circular economy, green hydrogen energy projects, with a hydrogen train, and climate investments. I applaud this new cooperation and encourage Infrabel and the port to work together for more frequent and more sustainable rail freight transport!"

Benoît Gilson, CEO Infrabel: "I am very pleased with the signing of this letter of intent and also with the establishment of a port railway team together with North Sea Port. It illustrates our joint ambition to make rail freight transport an even more important catalyst in Ghent Seaport, and in the whole of Belgium. This fits into our modal shift strategy and it benefits our economy, employment, climate and society. Together with our stakeholders and customers, we can and will achieve this objective".

Currently, many of the tracks in the port are non-electrified and have diesel locomotives running on them. Besides the possible electrification of the tracks, the use of green hydrogen for rail transport will also be considered, in particular carbon-neutral 'first and last mile' operation. This chimes with North Sea Port’s ambition of establishing a leading position in the production, transport and use of green hydrogen within Europe.

During the working visit, BeHydro, a partnership between the Ghent train engine manufacturer Anglo Belgian Corporation (ABC) and CMB, presented a concept note for a demonstration project for a hydrogen train.

From 10% to 15% of transport between port and hinterland

It goes without saying that more rail transport is needed. A sustainable modal shift is necessary to continue to guarantee the port’s accessibility. Moreover, the road network is becoming increasingly congested as road transport continues to grow. Rail is also more sustainable (a freight train takes an average of 50 trucks off the road) and energy efficient than road transport.

Rail transport between North Sea Port and its hinterland has grown steadily in recent years. A few years ago, it accounted for some 7% of all transport between port and hinterland (by truck, barge, train). Today, the figure has risen to 10%, with the target being to reach 15% by 2030. Further promoting rail transport and growing it by half is one of North Sea Port’s aims in terms of sustainability and climate. This aim is in line with the federal government’s target of doubling the share of rail in freight transport by 2030. 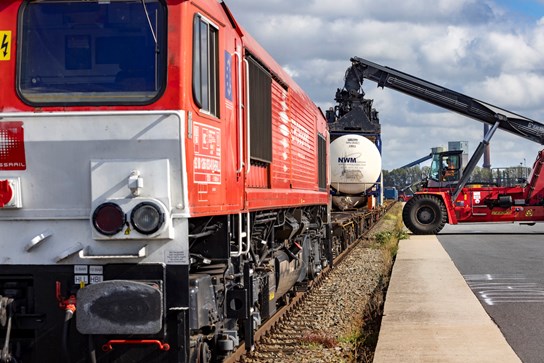