Denmark's DFDS is taking delivery of 125 all-electric trucks. The first of these e-trucks rolled off the ship into DFDS' terminal in Ghent on Thursday 16 November. This brings the green corridor between Scandinavia and Europe one step closer, with North Sea Port playing a central role.

DFDS is one of the biggest users of North Sea Port. Six times a week, large ro-ro vessels from the Danish shipping company shuttle between Ghent and Gothenburg. They form a floating bridge between the continent and Scandinavia for wheeled cargo (cars, trucks, containers, machinery, steel coils, parts...). In doing so, each week DFDS takes a fleet of vehicles off the roads that would stretch 30 kilometres end to end.

And DFDS extends is shipping services at both ends with transport to the hinterland, with offshoots to Central and Southern Europe and the Mediterranean region. This has created a ‘corridor’ crossing Europe from north to south. North Sea Port is the hub of this entire network.

Many shades of green

That corridor is getting greener and greener. Linking to the sea route, the shipping company already makes extensive use of barges and trains wherever possible, in order to shift its cargo from road to more environmentally friendly modes of transport. In addition, the terminal at Mercatordok in Ghent, North Sea Port, is also increasingly powered by energy from wind and sun.

Now road transport is also getting an extra dash of green. DFDS has taken delivery of its very first all-electric truck or e-truck in Ghent. This took place in the presence of Belgian Prime Minister Alexander De Croo. The shipping company has placed an order with Volvo Trucks for a total of 125 units. By the end of 2023, those trucks will all be in service. Meanwhile, Volvo Truck, which has its largest factory in Ghent, and DFDS have now thoroughly tested the first FH Electric Truck in Gothenburg.

DFDS is not alone in its pursuit of sustainability and energy transition on Europe's north-south axis. North Sea Port and Gothenburg, the largest seaport in Scandinavia, are together setting their sights on developing a green corridor and adapting the necessary infrastructure accordingly. Like DFDS, North Sea Port's ambition is to be completely carbon neutral by 2050.

"Green corridors throughout Europe are key to making the European Green Deal a reality”, emphasises Niklas Andersson, Executive Vice President Logistics at DFDS. "DFDS wants to see a quarter of its truck fleet running fully electric by 2030. But we are proving that heavy trucks with electric batteries are already an option today."

Daan Schalck, CEO, North Sea Port: “This will enable climate-neutral transport movements in the port between DFDS and other companies. In this way, DFDS is taking real strides towards making transport more sustainable." 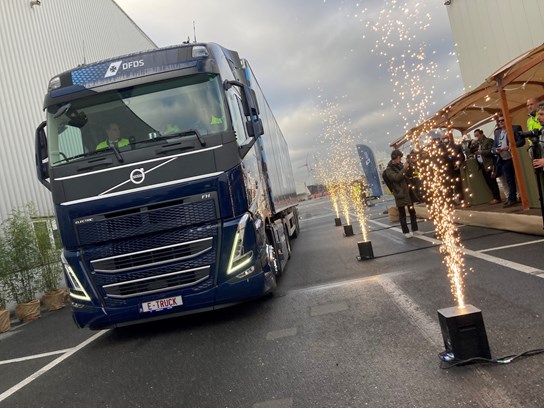