North Sea Port has posted a record year for the third year in a row. The firms based in the port transhipped 71.4 million tonnes of seaborne cargo, an increase of 1.5%. The growth is mainly due to dry bulk and containers.

Moreover, the figure of 71.4 million tonnes means North Sea Port has broken the 70 million tonne barrier for the second time. The rise is primarily down to a growth in exports for the third consecutive year (+9.9%). Two years after its launch as a merged port, North Sea Port is maintaining its position as a true bulk gateway and is also making progress as a hub for containers between maritime and inland waterways.

Dry bulk and containers on an upward trajectory

Almost half of the goods that North Sea Port tranships to and from maritime shipping is dry bulk. That volume rose to 34.6 million tonnes last year (+5.4%). Over two years, this segment is up 10%. A strong construction sector again meant increased transhipment of sand, gravel and construction materials in 2019. Coal transhipment - especially for processing industries - and agricultural products remained steady. Scrap and ores showed a small decline.

With very strong growth of 48.7%, container transhipment via maritime shipping amounted to a total of 2.5 million tonnes and 330,000 TEU. This segment has doubled in two years. As in previous years, this is the result of attracting new services and an increase in refrigerated containers. North Sea Port is also growing as a hub for onward transport of containers from maritime shipping to the hinterland via inland waterways.

The transhipment of wet bulk fell slightly to 20.1 million tonnes (-2.2%). This decrease was mainly evident in the (petro)chemical sectors, largely due to a maintenance shutdown. However, a sharp increase (+42%) was recorded in the transhipment of biodiesel and vegetable oil.

The transhipment of conventional break bulk cargo totalled 11 million tonnes (-6.6%). Part of this decrease is attributable to fruit because this is increasingly being transported in containers. However, the transhipment of machines is on an upward trend.

Ro/ro fell to 3.2 million tonnes (-9.6%), with a noticeable fall in the number of vehicles and trailers.

Inland navigation gets in on the act

The record-breaking was not confined to transhipment via maritime shipping – inland navigation also set a new record, with an increase from 58 million to 60 million tonnes (+3.4%).

With a record year behind it and rising freight transhipment in dry bulk and containers, North Sea Port is cautiously optimistic for 2020, as it was in early 2019. A continuation of the current trend of light growth is anticipated. Brexit, shrinking economic growth and (anticipated) trade wars provide reasons for caution. 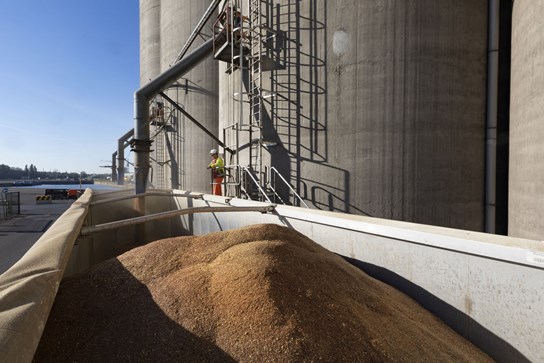