North Sea Port sea freight transhipments in the first half of 2019 totalled 36.6 mln tonnes. With its limited growth of 2% compared to the same period in 2018, this is once again the best semester ever.

The 2% growth in the first semester of this year is in line with expectations and the budget. North Sea Port is a true bulk port. Bulk cargo makes up three-quarters of sea freight. The dry bulk sector saw the highest growth. Container handling also greatly improved.

In terms of tonnage, dry bulk accounts for the largest part of cargo volume with 17.5 million tonnes. Its growth of 9% reflects the strong building construction sector (sand) and iron ore.

With an increase of 550,000 tonnes (81%), container transshipment once again showed very strong growth and reached 1.2 million tonnes. Some companies in North Sea Port managed to attract new shipping services in the past two years, which has a positive effect on the transshipment figures.

After a strong increase in the previous year, liquid bulk has fallen by 4%, mainly with respect to petroleum fuels and energy gases. The liquid bulk segment comes to a total of 10.4 million tonnes.

North Sea Port is slightly optimistic about the prospects for the second half of the year. 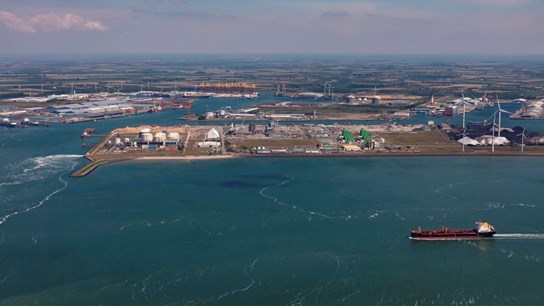