ArcelorMittal Belgium will reduce CO2 emissions by 3.9 million tons per year by 2030. To this end, it is building a direct reduced iron (DRI) plant with a capacity of 2.5 million tons and two electric furnaces at its site in Ghent.

Today, 28 September, ArcelorMittal announced that it has signed a letter of intent with the Belgian and Flemish governments to support a €1.1 billion project at the steel company's Ghent facility. It involves the construction of a 2.5 million ton direct reduced iron (DRI) plant and two new electric furnaces. These will work in parallel with the state-of-the-art blast furnace, which has been modified to use waste wood and plastics as an alternative to fossil carbon.

"This investment in Ghent by the world's biggest steel company speaks volumes. For North Sea Port, the investment means a commitment to the circular economy and a further embedding of one of the largest employers in the cross-border port area. Together with ArcelorMittal Belgium, we can make further progress towards the energy transition in the port area in order to be carbon neutral by 2050”, says Daan Schalck CEO of North Sea Port.

Instead of coal, a DRI plant uses natural gas and ultimately possibly hydrogen to reduce iron ore. This enables a major reduction in CO2 emissions compared to the production of steel via the blast furnace route. The two electric furnaces will melt the direct reduced iron (DRI) and steel scrap. This will then be transformed into slabs and processed into finished products in the steelworks.

Once the DRI plant and electric furnaces are built, there will be a transition period during which production will gradually shift from blast furnace A to the DRI plant and electric furnaces. After that, blast furnace A will be closed down, having reached the end of its service life. By 2030, this will result in a reduction of approximately 3 million tons in CO2 emissions per year.

The support of both the Belgian and Flemish governments for this project is crucial, given the significant costs associated with the transition to carbon-neutral steel production. Approval for the financial aid will also be required from the European Commission.

Towards carbon neutrality by 2050

In order to be carbon neutral by 2050, ArcelorMittal is working on three tracks:

- The implementation of Smart Carbon technologies:

Alexander De Croo, Belgian Prime Minister: "To tackle the climate crisis, we need to take ambitious measures. European countries are taking the lead, with clear targets to reduce greenhouse gas emissions by 55% by 2030 and go climate neutral by 2050. It’s good to see that sectors with a large footprint are also stepping up to the plate and investing in innovation to reduce emissions and achieve carbon neutrality in the long term. This significant investment by ArcelorMittal in new technologies is important for the entire Ghent region, for reducing our country's footprint, and demonstrates that decarbonising our economy is a collective effort."

Jan Jambon, Minister-President of Flanders: "We believe technological breakthroughs are critical to achieving the climate agenda. As such, the ambitious roadmap that ArcelorMittal has set out for its Ghent site represents an opportunity."

Aditya Mittal, CEO ArcelorMittal: "Today's announcement is the third major decarbonisation project we have announced in the past two months, demonstrating that we are taking firm steps to decarbonise our operations and, crucially, to make faster progress over the next decade. None of these projects would be possible without government support, so we are very grateful to the governments of Belgium and Flanders for their continued support in our transition to net zero steel production. Today's announcement of our project to build a 2.5 million ton DRI plant, which will exist alongside and complement the Smart Carbon pathway in which we are already investing in Ghent, is an example of the kind of transformational change we want and need to make in order to accelerate ArcelorMittal's shift to net zero steel production."

Manfred Van Vlierberghe, CEO ArcelorMittal Belgium: "ArcelorMittal Belgium is passionate about sustainability and circularity. We continue to invest and launch new projects in order to remain at the forefront of the energy and climate transition. This €1.1 billion project is a major milestone in our decarbonisation process. The DRI plant and two electric furnaces will result in a sharp reduction in CO2 emissions, while the revamped blast furnace will contribute to recycling end-of-life wood and plastic. This approach will help strengthen our global leadership in terms of CO2 and energy efficiency in the steel sector." 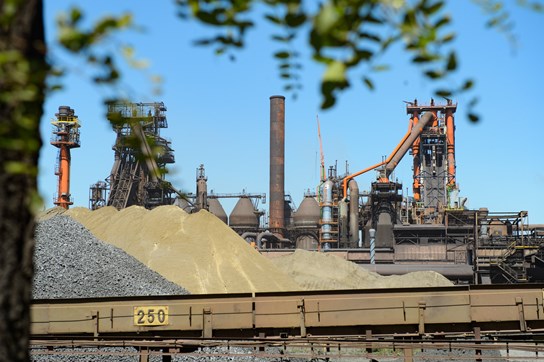