On Thursday 8 December, ArcelorMittal Ghent inaugurated its new plant for trapping and using carbon from CO2. This €200 million installation is the first of its kind in the European steel industry and one of the projects aimed at reducing CO2 emissions in the Ghent plant and in North Sea Port.

The Steelanol project is an important first for the European steel industry. It involves a €200 million plant that will trap and utilise the carbon in CO2, a process also known as ‘carbon capture and utilisation’ or CCU. The plant will make use of carbon recycling technology and biocatalysts to transform carbon-rich waste gases from the steelmaking process and from waste biomass into ethanol. This ethanol can then be used as a building block to produce a variety of chemical products including transport fuels, paints, plastics, clothing and even cosmetic perfume. The advanced ethanol will be jointly marketed by ArcelorMittal and LanzaTech under the Carbalyst® brand name.

Once production reaches full capacity, the Steelanol installation will produce 80 million litres of advanced ethanol – almost half of the total current advanced ethanol demand for fuel mixing in Belgium. This will reduce annual carbon emissions at the Ghent plant by 125,000 tonnes.

A climate-neutral and circular port

The Steelanol project is entirely in keeping with North Sea Port's ambition to reduce its CO2 emissions by half by 2030 and to be a climate-neutral port by 2050. The conversion of gas from blast furnaces into bio-ethanol – turning waste into a raw material – is also an example of the circular economy which the port intends to work toward in the coming years.
ArcelorMittal's accessibility to large seagoing vessels is crucial to those efforts. During the festive opening ceremony, Minister-President of Flanders Jan Jambon and Flemish Minister of Mobility and Public Works Lydia Peeters confirmed that the new lock in Terneuzen will be completed in 2023 and that Capesize ships will be able to reach ArcelorMittal.

Lakshmi Mittal, Executive Chairman of ArcelorMittal: “ArcelorMittal Ghent is widely regarded as one of the finest steel plants in Europe, staffed by talented, committed and forward-thinking people. We intend to ensure that reputation endures into the future and I believe the work being undertaken here lays the ground for what the steel plant of the future will look like. This is a steel plant which is embracing the latest innovative technologies; which is using sources of circular carbon; which captures and re-uses as many of its waste products as possible, recycling them into something of value; and which is preparing for a future when green hydrogen will remove the need to use any fossil carbon. It is a strong example of what is possible with energy, effort and of course, brilliant scientific minds. It also demonstrates what can be achieved through cooperation, so I must thank the Belgian and Flemish governments and the EIB for the support they are providing towards our efforts to transition to net-zero steelmaking.”

Alexander De Croo, Prime Minister of Belgium, had the following to say during the event: “I am pleased to see ArcelorMittal is taking bold and innovative steps by decarbonising its steel production at its new installation in Ghent. This is an important step in the fight against climate change, which also serves to safeguard our future competitiveness and secure Belgian jobs. By investing in clean energy technologies, ArcelorMittal is not only helping to lower carbon emissions, but is also setting the standard for the industry. The only way forward is cleaner production that leads to better products.”

Jan Jambon, Minister-President of Flanders and Flemish Minister of Foreign Affairs, Culture, Digitalisation and Facility Management, said: “Maintaining and enhancing heavy industry in Europe is of crucial importance for economic growth and strategic autonomy. The high ambitions of ArcelorMittal for sustainability and circularity fit within the climate targets of the Flemish government: a carbon-neutral and circular society by 2050, while safeguarding industrial and economic activities in our region.”

ArcelorMittal is the world's largest steel company, with a presence in 60 countries and primary steel production locations in 16 countries. In 2021, ArcelorMittal generated 76.6 billion dollars in revenue and produced 69.1 million tons of raw steel. Along with 50.9 million tons of iron ore.

ArcelorMittal is listed on the stock exchanges in New York (MT), Amsterdam (MT), Paris (MT), Luxembourg (MT) and on the Spanish exchanges in Barcelona, Bilbao, Madrid and Valencia (MTS).

The Steelanol project and other projects being undertaken in Ghent form an important part of ArcelorMittal’s 2030 climate action roadmap, in which the company is striving to reduce the carbon intensity of its steel by 25 per cent globally, and by 35 per cent across its European operations. Further information on the company's climate-related efforts can be found on the ArcelorMittal website. 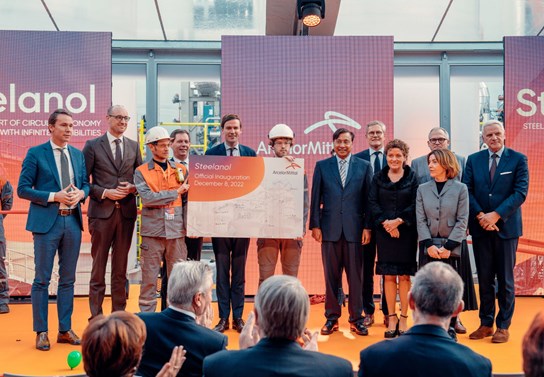