All-weather terminal at ArcelorMittal in North Sea Port will keep 25,000 trucks off the road

The very first covered loading quay ‘All-Weather Terminal’ in North Sea Port has been taken into operation. The new terminal in Ghent will be used primarily for the storage and shipment of ArcelorMittal Belgium’s finished steel rolls.

From now on, the All-Weather Terminal (AWT) – which will supplement ArcelorMittal Belgium's existing general cargo quay on the Ghent-Terneuzen Canal – will make it possible for this activity to go on around the clock, regardless of the weather conditions. The greater shipment capacity per vessel will eliminate the need for 25,000 truck transport movements annually, making the AWT a hefty investment in more sustainable logistics.

The AWT has a 200-metre-long covered quay wall, a 25-metre-wide dock and a volume of 30 metres above the waterline. This makes it possible for ships with a cargo capacity of up to 10,000 metric tons to moor at the new quay. The pre-sorting zone is equipped with two automated travelling cranes. There are also two telescopic cranes for loading and unloading the ships.

In addition, the terminal includes a warehouse (240 metres long and 60 metres wide) with a storage capacity of 60,000 metric tons, two rails connected to the quay area and three fully-automated travelling cranes for unloading, sorting and loading material. What sets this AWT apart is that ArcelorMittal Belgium has automated the entire logistical process – from unloading the truck to loading the ship.

The very first AWT in Ghent is making it possible to bundle goods flows even more efficiently, offering businesses greater logistical possibilities. In the past, high-quality steel could only be loaded in dry weather. The AWT will make it possible for this activity to go on around the clock, regardless of the weather conditions. “This, in turn, enables ArcelorMittal Belgium to further strengthen its customer service,” according to Manfred Van Vlierberghe, CEO of ArcelorMittal Belgium. “The AWT allows us to better distribute the delivery of rolls from ArcelorMittal's shipping halls in Ghent to the quay, so that we can optimise our internal logistical processes.” Use of the AWT – together with the existing ‘open’ general cargo quay – will therefore serve to support the growth of the Ghent-based steel company. “The AWT also represents an investment in sustainability,” Manfred Van Vlierberghe continues, “because it will eliminate up to 25,000 truck transport movements per year. In this way, ArcelorMittal Ghent intends to become a leader with regard to sustainable logistics.”

The new terminal is owned by AWT GENT NV, which was established by the Flemish investment company PMV and the investment fund EPICo. The terminal was designed and constructed at the behest of AWT GENT, which will oversee its maintenance and operation as well. The warehouse is intended not only to provide logistics services to ArcelorMittal Ghent, but to other clients as well. Twenty per cent of the 60,000 metric tons of storage capacity can also be used to handle other materials and general goods/cargo.

“The very first AWT in North Sea Port is making it possible to bundle the different goods flows even more efficiently, which offers businesses greater logistical possibilities,” says Daan Schalck, CEO of North Sea Port, which granted the concession for the land on which the terminal was built and dredged the berth. “Through innovative infrastructure, North Sea Port wants to make the port as accessible as possible – by rail, road, seagoing vessel and barge. By investing in the AWT together with various partners, North Sea Port is helping the businesses achieve sustainable growth.”

The contract was signed in mid-June 2018. The construction proceeded according to plan and the terminal has now been taken into operation. Wouter Everaert is Infrastructure Business Manager with the Flemish investment company PMV. Speaking on behalf of the owner AWT GENT NV, he reflects on the process with satisfaction. “We are pleased that, thanks to the AWT, we will be able to more firmly embed ArcelorMittal in North Sea Port in Ghent. Strengthening the position of industrial businesses in Flanders is a vital objective for PMV. Having taken responsibility for the design, construction, financing, maintenance and operation of the AWT, we are proud to have played a role as financier, developer and facilitator of this project.” 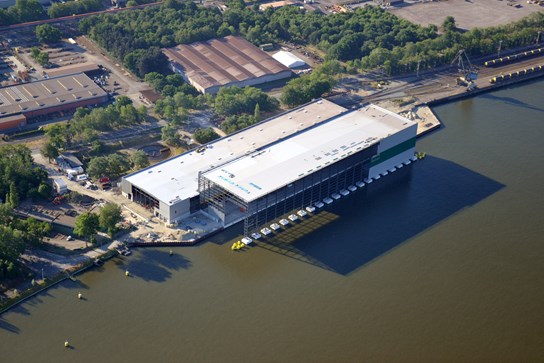