From now on, Customs and the Federal Agency for the Safety of the Food Chain can also check packaged animal products from outside the European Union in Ghent. North Sea Port has built a border control post for these products, transported in containers.

Packaged animal products from outside the EU such as chilled and frozen fish, meat and certain kinds of animal feed can now arrive directly by seagoing vessel in Ghent and be inspected there. In addition, animal products arriving in Antwerp by sea can also be transhipped immediately to another vessel and then transported via the Scheldt and the Ghent-Terneuzen Canal to Ghent to be inspected at the border control post there. Until now, veterinary import checks on such products had to be carried out at ports such as Antwerp, Rotterdam, Zeebrugge and Calais.

The goods would then be transported by road to Ghent. This is no longer necessary. The Belgian Federal Agency for the Safety of the Food Chain (FAVV) and the European Commission have given their consent to this change.

Animal product checks and customs formalities under one roof

North Sea Port has built this border control post in order to accommodate the FAVV and customs at one and the same location. Here they can inspect containers, examine samples in the laboratory and handle administrative formalities. The resulting more efficient service will result in a smoother flow of goods entering the port. This is therefore a win-win situation in terms of time and efficiency for the supply chain and logistics players.

The use of water-borne transport will reduce the number of trucks on the roads. This is in line with North Sea Port’s decision to promote more sustainable transport by water. And as a multimodal deep sea port, North Sea Port facilitates the onward transport of these products via its extensive network of hinterland connections, particularly for container transhipment.

Expanding the range of products for inspection

Thanks to this border control post, North Sea Port is able to greatly expand the range of products that can be inspected in Ghent. Until now, North Sea Port in Ghent only had a border control post for veterinary import checks on animal fats and oils in bulk and for packaged animal feed. In Vlissingen, the Netherlands, inspection is available for packaged goods for human consumption and frozen, packaged goods for non-human consumption. 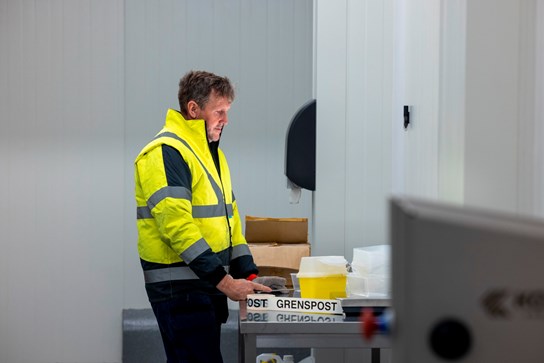